Immunotherapy is a promising weapon in the fight against cancer 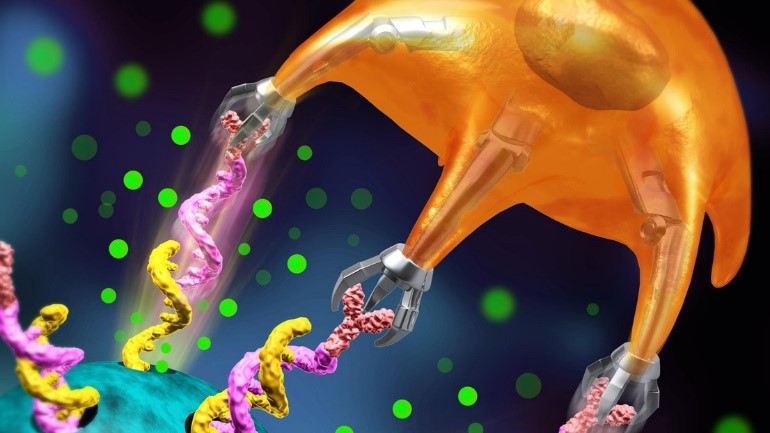 Immunotherapy is a promising weapon in the fight against cancer

Immunotherapy is a promising weapon in the fight against cancer. It has proven to be much more effective than chemotherapy and radiotherapy in treatment of some cancers. The drawback is that it manages to cure only about 20% of patients; the remaining 80% do not respond to this kind of treatment. “But if doctors use a stronger form of immunotherapy in order to treat more people, it could become toxic for patients and lead to side effects,” says Li Tang, the head of EPFL’s Laboratory of Biomaterials for Immunoengineering within the School of Engineering. His team of scientists is developing a method that focuses immunotherapy only on tumor cells, so that the treatments are more effective and less harmful to the body as a whole. Their approach has just been published in Materials Horizons as a cover story.

T cells are the cells in our immune system that destroy cancer cells. Immunotherapy involves administering drugs to make those cells more powerful. “When T cells come into contact with cancer cells, they destroy the cells by releasing chemical compounds as well as applying mechanical force,” explains Tang. For immunotherapy to work with limited patient toxicity, the drugs have to be delivered precisely during this step. Existing immunotherapy treatments use biochemical signals to control the drug-release process. “But that’s a blunt tool because doctors have no control over how a drug diffuses within the body,” says Tang. To get around this problem, his team developed a method that uses a biomechanical signal, which means that drugs are released only when T cells come into contact with cancer cells. “The T cells’ mechanical force is only triggered when they are touching their target cells,” he says.

Tang’s method involves using a silica microparticle that contains lots of tiny holes. The drug is placed inside the holes, which are then capped with double-strand DNA. “We chose DNA because T cells are able to break the double-helix strands,” says Tang. When a T cell comes into contact with the microparticle, its mechanical force automatically breaks the DNA – thereby releasing the drug. “For now we’ve only just completed the proof of concept stage. We’ve shown that our idea works, but we need to develop the technology further before we can start conducting clinical trials,” says Tang. More specifically, his team will work on improving the system’s sensitivity, shrinking the microparticle down to the nanometric scale, and trying it out with different drugs. Tang eventually hopes to develop a dual-agent process whereby the T cell attaches to a nanoparticle that in turn comes into contact with the cancer cell. That means the drug would be released by the T cell, making it more effective in destroying tumors.

Tang’s lab is the first to use the mechanical force of T cells in immunotherapy applications. “If our discovery increases the percentage of patients who respond to immunotherapy by even one percentage point, then we’ll have met the challenge,” he says.

The scientific journal Materials Horizons awarded its Emerging Investigator Award to Professor Li Tang for his publication entitled: “T cell force-responsive delivery of anticancer drugs using mesoporous silica microparticle ». The Editorial Board select every month, from a list of eligible articles, an early-career researcher in materials science who is identified as having the potential to influence future directions in the field. “My lab is doing innovative research at the interface of cancer immunotherapy and material engineering. This award is a great recognition for the work done by my team", says the professor.