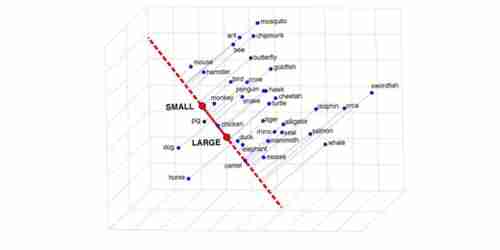 A depiction of semantic projection, which can determine the similarity between two words in a specific context. This grid shows how similar certain animals are based on their size.

In “Through the Looking Glass,” Humpty Dumpty says scornfully, “When I use a word, it means just what I choose it to mean — neither more nor less.” Alice replies, “The question is whether you can make words mean so many different things.”

The study of what words really mean is ages old. The human mind must parse a web of detailed, flexible information and use sophisticated common sense to perceive their meaning.

Now, a newer problem related to the meaning of words has emerged: Scientists are studying whether artificial intelligence can mimic the human mind to understand words the way people do. A new study by researchers at UCLA, MIT and the National Institutes of Health addresses that question.

The paper, published in the journal Nature Human Behaviour, reports that artificial intelligence systems can indeed learn very complicated word meanings, and the scientists discovered a simple trick to extract that complex knowledge. They found that the AI system they studied represents the meanings of words in a way that strongly correlates with human judgment.

The AI system the authors investigated has been frequently used in the past decade to study word meaning. It learns to figure out word meanings by “reading” astronomical amounts of content on the internet, encompassing tens of billions of words.

That approach seems like a logical starting point, but consider how well humans would understand the world if the only way to understand meaning was to count how often words occur near each other, without any ability to interact with other people and our environment.

Idan Blank, a UCLA assistant professor of psychology and linguistics, and the study’s co-lead author, said the researchers set out to learn what the system knows about the words it learns, and what kind of “common sense” it has.

Before the research began, Blank said, the system appeared to have one major limitation: “As far as the system is concerned, every two words have only one numerical value that represents how similar they are.”

In contrast, human knowledge is much more detailed and complex.

“Consider our knowledge of dolphins and alligators,” Blank said. “When we compare the two on a scale of size, from ‘small’ to ‘big,’ they are relatively similar. In terms of their intelligence, they are somewhat different. In terms of the danger they pose to us, on a scale from ‘safe’ to ‘dangerous,’ they differ greatly. So a word’s meaning depends on context.

“We wanted to ask whether this system actually knows these subtle differences — whether its idea of similarity is flexible in the same way it is for humans.”

To find out, the authors developed a technique they call “semantic projection.” One can draw a line between the model’s representations of the words “big” and “small,” for example, and see where the representations of different animals fall on that line.

Using that method, the scientists studied 52 word groups to see whether the system could learn to sort meanings — like judging animals by either their size or how dangerous they are to humans, or classifying U.S. states by weather or by overall wealth.

Among the other word groupings were terms related to clothing, professions, sports, mythological creatures and first names. Each category was assigned multiple contexts or dimensions — size, danger, intelligence, age and speed, for example.

The researchers found that, across those many objects and contexts, their method proved very similar to human intuition. (To make that comparison, the researchers also asked cohorts of 25 people each to make similar assessments about each of the 52 word groups.)

Remarkably, the system learned to perceive that the names “Betty” and “George” are similar in terms of being relatively “old,” but that they represented different genders. And that “weightlifting” and “fencing” are similar in that both typically take place indoors, but different in terms of how much intelligence they require.

“It is such a beautifully simple method and completely intuitive,” Blank said. “The line between ‘big’ and ‘small’ is like a mental scale, and we put animals on that scale.”

Blank said he actually didn’t expect the technique to work but was delighted when it did.

“It turns out that this machine learning system is much smarter than we thought; it contains very complex forms of knowledge, and this knowledge is organized in a very intuitive structure,” he said. “Just by keeping track of which words co-occur with one another in language, you can learn a lot about the world.”