Findings highlight that novel complex trait, such as eyespots, evolve from gene networks that already pattern pre-existent complex traits in the body 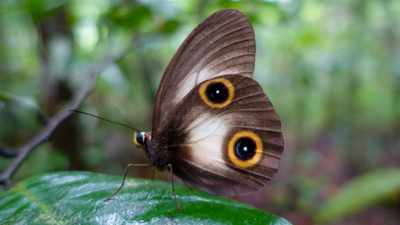 Eyespots, the circular markings of contrasting colours found on the wings of many butterfly species, are used by these fluttering creatures to intimidate or distract predators. A team of scientists led by Professor Antónia Monteiro from the National University of Singapore (NUS) conducted a research study to better understand the evolutionary origins of these eyespots, and they discovered that eyespots appear to have derived from the recruitment of a complex network of genes that was already operating in the body of the butterflies to build antennae, legs, and even wings.

“This new study addresses how novel complex traits might originate. These complex traits require the input of many interacting genes for their development, and are often illustrated by the vertebrate eye, or the bacteria flagellum. In our study, we looked at the how butterfly eyespots – an example of a complex trait - came about and concluded that a network recruitment approach is adopted by butterflies for the creation of eyespots. We have also identified the specific network of genes that was likely recruited,” said Prof Monteiro, who is from the NUS Department of Biological Sciences.

The findings were first published in the journal Proceedings of the National Academy of Sciences of the USA on 16 February 2022.

The mystery of how organisms are built

Understanding gene network recruitment can be approached by imagining a complex computer program with thousands of lines of code, with each line representing a simple instruction or function. Within the code are blocks of text, positioned a bit further inward from the margin, representing subroutines. These subroutines, or sets of instructions that perform specific tasks, are written once in the code, but are referred to repeatedly by the program as it runs. For this to occur, each subroutine has to be given a unique name, and referred to in the subsequent code. A complex bit of code often contains many subroutines, where each unique subroutine is written only once in full.

The presence of these subroutines had been hypothesised before, primarily because the same genes kept being discovered as expressed and associated with the development of novel traits. However, it was unclear if the expression of these genes in the novel trait represented new lines of genome code each calling for a pre-existing gene to be expressed, or pre-existing lines of code being read one more time, similar to a subroutine in a computer program.

Discovering the role of gene network recruitment in novel traits

To figure this out, NUS postdoctoral fellow Dr Heidi Connahs and doctoral student Mr Suriya Murugesan deleted unique DNA regulatory sequences in the genome, but not the genes themselves, and showed that multiple traits were affected by these mutations. This argues for a single gene regulatory network, or subroutine, underlying the development of all the traits. The two pieces of DNA that were targeted were regulatory switches next to the genes Distal-less and spalt. The development of eyespots, antennae, legs, and wings were all disrupted when these regions of around 390-700 base pairs were disrupted. “It was amazing to observe how these significant complex traits were affected by the same changes in DNA”, said Dr Connahs.

Mr Murugesan also sequenced the pieces of tissue that develop eyespots on the wings and compared the complete set of expressed genes with those expressed in other traits. “Eyespots shared the closest gene expression profile with antennae, but not with legs or other wing tissue, such as the wing margin,” said Mr Murugesan. NUS postdoctoral fellow, Dr Yuji Matusoka, then examined three genes expressed in both eyespots and antennae and showed that the regulatory connections between them were identical, with one gene being important in regulating two others. “When I found a patch of cells in the eyespot region without the expression of the first gene, I realised that the expression of the other two genes was also missing,” said Dr Matusoka.

“These experiments relied on discovering mutations that hit exactly the eyespot central cells after embryonic injections which required a lot of patience,” said Prof Monteiro.

Overall, the study highlighted that the evolution of novel complex traits, such as butterfly eyespots, proceeds via mutations in the genetic code that recall a pre-existent subroutine in the genome that was already used for other complex traits such as antennae and other limbs. The types of mutations that produce these redeployments of pre-existing gene networks are still left to be discovered, but they are predicted to be ordinary mutations that, by chance, lead to the recall of large pre-existent genomic sub-routines involving hundreds of genes.

The next step in this research is to further test whether the corresponding regulatory sequences from these two genes from butterfly species without eyespots are able to activate gene expression in the eyespot region in species with eyespots. “This would be the icing on the cake,” said Prof Monteiro, “because it further confirms that a genetic sequence from an old subroutine will get recalled to that novel place in the body in species with the recall mutation.”

Source: Based on National University of Singapore news release