An unexpectedly rich array of early galaxies that was largely hidden until now has been observed by researchers using data from NASA’s James Webb Space Telescope. 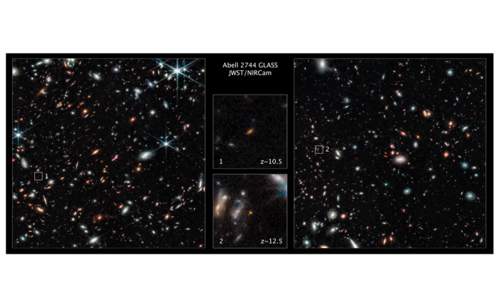 An unexpectedly rich array of early galaxies that was largely hidden until now has been observed by researchers using data from NASA’s James Webb Space Telescope.

The researchers found two exceptionally bright galaxies that existed approximately 350 and 450 million years after the big bang. Their extreme brightness is puzzling to astronomers and challenges existing models of galaxy formation.

“These objects are remarkable because they are far brighter than we would expect from our models of how galaxies form,” said Joel Leja, assistant professor of astronomy and astrophysics at Penn State, who developed the code used to analyze light from the distant galaxies.

As a postdoctoral fellow at the Harvard-Smithsonian Center for Astrophysics, Leja developed code capable of making sense of infrared data from distant galaxies, such as those imaged by Webb, proving that they are in fact our first glimpses of the very early universe.

“The code combines models of all the things that live in galaxies and interprets the light we observe from them,” said Leja. “This includes things like stars of various ages and elemental compositions, cosmic dust that blocks the light we see from stars, emission from gaseous nebulae, and so on.”

Two research papers, one led by Marco Castellano of the National Institute for Astrophysics in Rome, Italy, and another by Rohan Naidu of the Harvard-Smithsonian Center for Astrophysics and the Massachusetts Institute of Technology with Leja as co-author, have been published in the Astrophysical Journal Letters. The two papers describe the bright celestial objects, which both teams discovered separately in quick succession just days after Webb officially started science operations.

"With Webb, we were amazed to find the most distant starlight that anyone had ever seen, just days after Webb released its first data," Naidu said in a NASA news release.

With just four days of analysis, the researchers found two exceptionally bright galaxies. They determined the young galaxies transformed gas into stars extremely rapidly, meaning the onset of stellar birth may have started just 100 million years after the big bang, roughly 13.8 billion years ago. The researchers also determined the two galaxies existed approximately 450 and 350 million years after the big bang, though future spectroscopic measurements with Webb will help confirm their findings.

The telescope is equipped with infrared-sensing instruments capable of detecting light that was emitted by the most ancient stars and galaxies. It was designed to solve mysteries in our solar system, look beyond to distant worlds around other stars, and probe the mysterious structures and origins of our universe and our place in it, NASA stated in a release.

“Everything we see is new. Webb is showing us that there's a very rich universe beyond what we imagined," Tommaso Treu of the University of California at Los Angeles, principal investigator on one of the Webb programs said in the release. "Once again the universe has surprised us.”

The Webb observations nudge astronomers toward a consensus that an unusual number of galaxies in the early universe were much brighter than expected. This will make it easier for Webb to find even more early galaxies in subsequent deep sky surveys, the researchers explained.

At present, all that is known about the two galaxies is based on measuring their infrared colors, which were detected by Webb. Eventually, follow-up spectroscopy measurements showing how light has been stretched in the expanding universe will provide independent verification of the existing cosmic measurements.

"These observations just make your head explode," Paola Santini of the Astronomical Observatory of Rome and co-author on the Castellano paper said in the release. “This is a whole new chapter in astronomy. It's like an archaeological dig, and suddenly you find a lost city or something you didn’t know about. It’s just staggering.”