Breaking in a new planet

Impacts affect the porosity and structure of moons and planets more dramatically than scientists suspected, increasing their potential habitability for life. 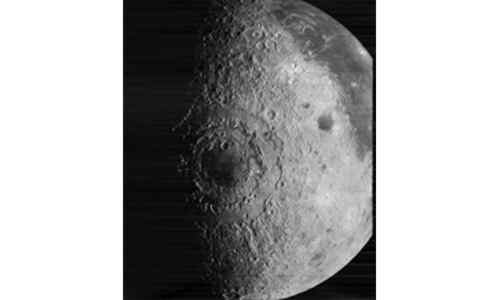 The moon’s Mare Orientale is a crater approximately 3.9 billion years old and nearly 1,000 kilometers in diameter. It is one of several large basins responsible for much of the porosity of the moon's crust. (NASA image)

The harder you hit something – a ball, a walnut, a geode – the more likely it is to break open. Or, if not break open, at least lose a little bit of its structural integrity, the way baseball players pummel new gloves to make them softer and more flexible. Cracks, massive or tiny, form and bear a silent, permanent witness to the impact.

Studying how those impacts affect planetary bodies, asteroids, moons and other rocks in space helps planetary scientists including Brandon Johnson, associate professor, and Sean Wiggins, postdoctoral researcher, in the College of Science’s Department of Earth, Atmospheric, and Planetary Sciences at Purdue University, understand extraplanetary geology, especially where to look for precious matter including water, ice and even, potentially, microbial life. .

Every solid body in the solar system is constantly pummeled by impacts, both large and small. Even on Earth, every single spot has been affected by at least three big impacts. Using the moon as a test subject, Johnson, Wiggins and their team set out to quantify the relationship between impacts and a planet’s porosity.

The researchers used extensive lunar gravity data and detailed modeling and found that when large objects hit the moon or any other planetary body, that impact can affect surfaces and structures, even very far away from the point of impact and deep into the planet or moon itself. This finding, detailed in their new study published in the journal Nature Communications, explains existing data on the moon that had puzzled scientists. The research was partially funded by funded by NASA’s Lunar Data Analysis Program.

“NASA’s GRAIL (Gravity Recovery and Interior Laboratory) mission measured the gravity of the moon and showed that the moon crust is very porous to very great depths,” Johnson said. “We didn’t have a description of how the moon would get so porous. This is the first work that really shows that large impacts are capable of fracturing the moon’s crust and introducing this porosity.”

Understanding where planets and moons have fractured, and why, can help direct space exploration and tell scientists where the best place to look for life might be. Anywhere that rock, water and air meet and interact, there is a potential for life.

“There’s a lot to be excited about,” Wiggins said. “Our data explains a mystery. This research has implications for the early Earth and for Mars. If life existed back then, there were these intermittently big impacts that would sterilize the planet and boil off the oceans. But if you had life that could survive in pores and interstices a few hundred feet or even a few miles down, it could have survived. They could have provided these refuges where life could hide out from these kinds of impacts.

“These findings have a lot of potential for directing future missions on Mars or elsewhere. It can help direct searches, tell us where to look.”