Eenergy is produced as the algae undergoes photosynthesis, which is the process used by plants, algae, and certain bacteria 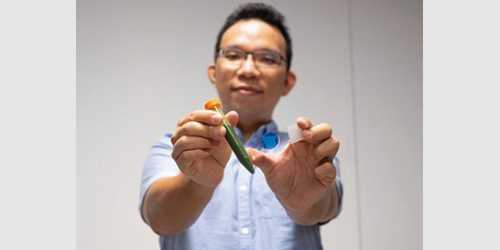 The variety of humble algae that cover the surface of ponds and seas could hold the key to boosting the efficiency of artificial photosynthesis, allowing scientists to produce more energy and lower waste in the process.

A study by Nanyang Technological University, Singapore (NTU Singapore) scientists showed how encasing algae protein in liquid droplets can dramatically enhance the algae’s light-harvesting and energy-conversion properties by up to three times. This energy is produced as the algae undergoes photosynthesis, which is the process used by plants, algae, and certain bacteria to harness energy from sunlight and turn it into chemical energy.

The study, led by Assistant Professor Chen Yu-Cheng from the School of Electrical and Electronic Engineering, looked at a particular type of protein found in red algae. These proteins, called phycobiliproteins, are responsible for absorbing light within algae cells to kick-start photosynthesis.

Phycobiliproteins harvest light energy from across the spectral range of light wavelengths, including those which chlorophylls absorb poorly, and convert it to electricity.

Asst Prof Chen said: “Due to their unique light-emitting and photosynthetic properties, phycobiliproteins have promising potential applications in biotechnology and solid-state devices. Boosting the energy from the light-harvesting apparatus has been at the centre of development efforts for organic devices that use light as a

The team’s research may lead towards a new, sustainable way of generating electricity from sunlight that does not rely on fossil fuels or natural gas, which are non-renewable. New bio-inspired technology based on phycobiliproteins could be used to make more efficient solar cells and paves the way for greater efficiency within artificial photosynthesis.

Using algae as a source of biological energy is a popular topic of interest in sustainability and renewable energy, as algae usage potentially reduces the amount of toxic by-products created in the manufacturing of solar panels.

The study supports NTU’s commitment to sustainability as part of its 2025 strategic plan, which seeks to understand, articulate, and address humanity’s impact on the environment.

The findings were published and selected as the cover of scientific journal ACS Applied Materials Interfaces.