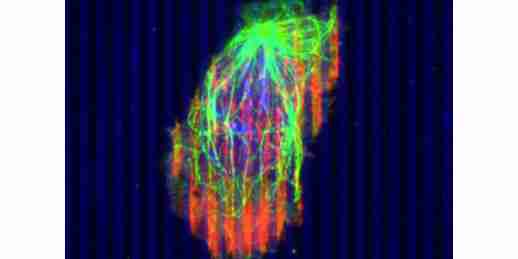 A study led by engineering and medical researchers at the University of Minnesota Twin Cities shows how engineered immune cells used in new cancer therapies can overcome physical barriers to allow a patient’s own immune system to fight tumors. The research is published in Nature Communications. T cells are a type of white blood cell that are of key importance to the immune system. Cytotoxic T cells are like soldiers who search out and destroy the targeted invader cells. While there has been success in using immunotherapy for some types of cancer in the blood or blood-producing organs, a T cell’s job is much more difficult in solid tumors.  “The tumor is sort of like an obstacle course, and the T cell has to run the gauntlet to reach the cancer cells,” said Paolo Provenzano, the senior author of the study. “These T cells get into tumors, but they just can't move around well, and they can't go where they need to go before they run out of gas and are exhausted.”

In this first-of-its-kind study, the researchers are working to engineer the T cells and develop engineering design criteria to mechanically optimize the cells or make them more “fit” to overcome the barriers. If these immune cells can recognize and get to the cancer cells, then they can destroy the tumor.  “This study has identified some structural and signaling elements where we can tune these T cells to make them more effective cancer fighters,” said Provenzano, a researcher in the University of Minnesota Masonic Cancer Center. “After engineering these immune cells, we found that they moved through the tumor almost twice as fast no matter what obstacles were in their way.” To engineer cytotoxic T cells, the authors used advanced gene editing technologies (also called genome editing) to change the DNA of the T cells so they are better able to overcome the tumor’s barriers. The ultimate goal is to slow down the cancer cells and speed up the engineered immune cells. The researchers are working to create cells that are good at overcoming different kinds of barriers. When these cells are mixed together, the goal is for groups of immune cells to overcome all the different types of barriers to reach the cancer cells.