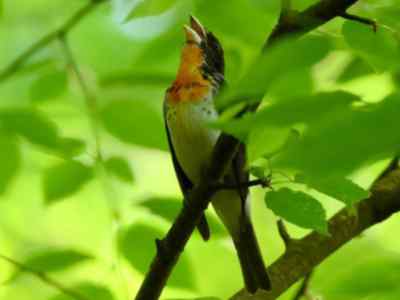 This healthy, 1-year-old male offspring of a rose-breasted grosbeak and scarlet tanager is the first-ever documented hybrid of its kind. The two species have such divergent nesting preferences that they have been on independent evolutionary trajectories for at least 10 million years — until now. Credit: Stephen Gosser. All Rights Reserved.

In June of 2020, Stephen Gosser, a self-described “diehard birder,” was out in the woods of western Pennsylvania when he thought he heard the song of the elusive and strikingly beautiful scarlet tanager. The blood-red bird with black wings and tail is a favorite among birders for both its beauty and rarity, as the birds prefer to stay hidden high in the forest canopy.

When Gosser finally located the songbird, he saw what appeared to be a rose-breasted grosbeak, but it sounded just like a scarlet tanager. He took some photos and called for backup—a team from the National Aviary in Pittsburgh arrived soon after to catch the bird and obtain a blood sample.

To follow up on Gosser’s tip, a team of researchers led by Penn State was able to use a combination of genomic sequencing and song analysis to identify the specimen as a rare hybrid bird, whose ancestors haven’t shared the same breeding location or lineage for 10 million years. Their work was recently published in the journal Ecology and Evolution.

“I love this story, because it starts with a little mystery and ends with a surprising discovery,” said David Toews, lead author of the study and assistant professor of biology at Penn State.

The story begins with a very unlikely encounter between a female rose-breasted grosbeak and a male scarlet tanager. How and where they met remains a mystery to researchers, as the two species prefer different habitats. Tanagers typically prefer the canopy cover of mature forests while rose-breasted grosbeaks are happy out in the open along the edges of woodlands. Toews explained that the two species have such divergent nesting preferences that they have been on independent evolutionary trajectories for at least 10 million years — until now.

The researchers determined that the bird Gosser spotted was the healthy, 1-year-old male offspring of a rose-breasted grosbeak and scarlet tanager, the first-ever documented hybrid of its kind. Yet, his origin story was largely a mystery.

Luckily, Toews had a host of techniques available for solving just this type of mystery. From the blood sample, they could obtain a small sample of DNA. The combination of audio and genetic material would get them as close as they could to solving the mystery of the bird’s genesis.

Their methodology relied on analyzing both nature and nurture. For the most part, songbirds learn to sing from their fathers. Their vocalizations can reveal how and by whom they were raised.

“We knew Mom was there, she was the one who laid the egg and sat on the nest,” Toews said. “It’s still not obvious to us where that would have been, because the two species prefer such different habitats. Wherever it was, her pair either stayed around long enough for the young offspring to learn his father’s song or learned a neighborhood scarlet tanager song.”

The researchers used a method called bioacoustic analysis to confirm the vocalizations they captured did, in fact, match the song of a scarlet tanager — revealing that the hybrid likely learned to sing from his father.

“Something people may not understand is that when we analyze birdsongs, we're not actually listening to them. We're looking at them,” said Toews. “We're looking at wavelengths of the sound — or the ‘spectrogram’ is a more accurate term — and we’re actually measuring visual components of a soundwave to analyze the song.”

With the vocalizations confirmed, the team turned to genomic sequencing to track the genetic ancestry of the hybrid. Nature confirmed what nurture had already revealed, a grosbeak mother and tanager father.

“We used the same tools that we’ve used to identify other hybrids, but we typically have more ambiguous answers that are a bit more esoteric,” said Toews. “In this case, we identified the species. We know who the parents were and we have a somewhat satisfying conclusion at the end. I find this story resonates with more than just your average ornithological nerd like myself.”