Birds and dinosaurs — joined at the hip 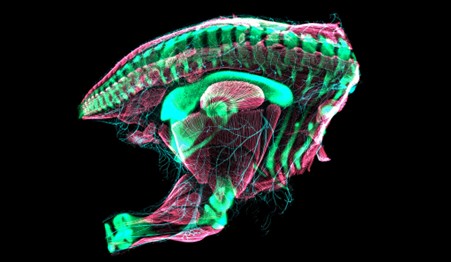 Embryonic quail hindquarters imaged using laser scanning confocal microscopy. The skeleton is in green, nerves are in blue, and muscles are in red. The pelvis of this quail embryo has just transformed into a relatively “modern” bird configuration. (Credit: Christopher T. Griffin and Bhart-Anjan S. Bhullar)

All baby birds have a moment prior to hatching when their hip bone is a tiny replica of a dinosaur’s pelvis.

That’s one of the findings in a new, Yale-led study in the journal Nature that explores the evolutionary underpinnings of the avian hip bone. It is also a modern-day nod to the dramatic transformation that led from dinosaurs to birds over tens of millions of years.

“Every single bird, in its early life, possesses this dinosaurian form,” said Bhart-Anjan S. Bhullar, assistant professor of Earth & planetary science at Yale and senior and corresponding author of the new study. “Then, at the last minute, it’s like it remembers it’s a bird and needs a bird’s pelvis.”

Over the past decade, Bhullar and his collaborators have conducted ground-breaking research on key evolutionary transitions between dinosaur, reptile, and avian species — including the development of the dinosaurian inner ear, the bird beak, the mammalian rolling jaw, and eyesight in vertebrates.

Bhullar’s lab is particularly known for its innovative use of computed tomographic (CT) scanning and microscopy to create 3D images of animal embryos.

Christopher Griffin, a postdoctoral associate in Bhullar’s lab, is lead author of the study. He and Bhullar, with their colleagues, looked at pelvic development in alligators, domestic chickens, Japanese quail, Chilean tinamou, and parakeets, and compared their developmental stages with those of dinosaurs, including the feathered species Archaeopteryx.

For the study, the team labeled embryonic hip bones with antibodies to look for proteins that are expressed in developing cartilage, connective tissue, skeletal muscles, and nerves. The researchers created 3D images for the hip bones, muscles, and nerves with confocal microscopes and CT scanning.

They found that the bird pelvis is an example of “terminal addition,” a biological mechanism in which ancestral features appear in an animal until late in its development. This was a surprise, Griffin noted, because many important features in the dinosaur-to-bird transition, such as the bird’s beak, are seen early in a bird’s embryonic development.

“It was unexpected to find these initial stages of bird development look so much like the hips of an early dinosaur,” Griffin said. “During just two days, the developing embryo changes in a way that reflects how they changed in evolution, transitioning from looking like an early dinosaur to looking like a modern bird.”

The hip bone is the core of a bird’s body. It runs the length of the avian frame, engulfing the torso, while also enabling a bird to stand, move, and carry the weight of its entire body.

“The bird body is incredibly modified in virtually every way to create an optimized flying machine,” Bhullar explained. “Its body structures are tightly constrained by the necessities of aeronautic design.”

The new study also looked at avian muscles and nerves related to the development of the hip. The researchers said development of those systems were not synchronous with bone development — implying that each system was somewhat “uncoupled” from the others.