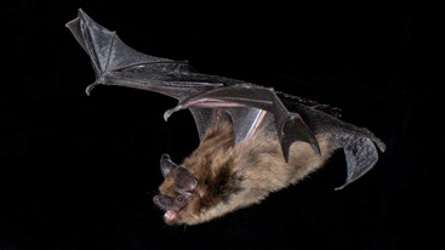 The big brown bat (Eptesicus fuscus) is a species of Yangochiroptera bat that uses complex, varying sounds to echolocate. Photo by Sherri and Brock Fenton

Two major groups of bats that use echolocation have different structures for connecting the inner ear to the brain, according to a new study by researchers from the University of Chicago, the American Museum of Natural History and the Field Museum.

“Biologists have speculated that the two major groups of bats have different ways of seeing the world through sound,” said the study’s lead author Benjamin Sulser, SB’16, a UChicago alum and current Ph.D. student at the American Museum of Natural History. “This is the first time we found different neuroanatomies in the inner ear, which give these bats different ways of processing the echolocating signal.”

Bats are unique mammals, the only group capable of powered flight. They are also extremely diverse, with about 1,440 species that make up more than 20% of all known mammal species. Most bats navigate their world through echolocation, a way of emitting distinct sounds and then listening for the returning echo. Echolocation helps bats orient themselves, forage for food, and avoid obstacles while flying.

“The capacity to echolocate opened enormous ecological opportunities for bats, which ‘own’ the night skies. The complexity of this adaptation allows bats to use it in many different ways,” said Bruce Patterson, the MacArthur Curator of Mammals at the Field Museum and co-author of the study.

Bats’ sense of hearing is intricately related to biological adaptations for echolocation. About 20 years ago, molecular studies of the mammal tree of life revealed that echolocating bats belong to two lineages: Yinpterochiroptera, or “Yin” bats, and Yangochiroptera, or “Yang” bats. This suggests that the hearing function for echolocation evolved quite differently, possibly twice, among the bats. But a long-standing question remained: Do the ear structures differ between these two long-separated lineages of bats?

Sulser began this work as part of his undergraduate thesis in the lab of Zhe-Xi Luo, Professor of Organismal Biology and Anatomy at UChicago and senior author of the new study. He found that the inner ear ganglion, a major structure of neurons that connects the sound capturing structures of the inner ear to the brain, has different anatomical configurations between Yin and Yang bats

The new findings started with CT scans of several teaching specimens of bat skulls from the Biological Sciences Collegiate Division at UChicago. After the initial discovery in 2016, it took another three years for the team to complete a full-scale survey across 39 species of bats from almost all bat families, using more specimens from both museums to corroborate their findings.

In all mammals, including bats, the sense of hearing starts with hair cells in the inner ear that vibrate in response to sound waves. These hair cells are connected to nerve cells in the inner ear spiral ganglion, which is protected by a bony canal. The canal wall has a series of holes that allow nerve fibers to poke through and connect to the main auditory nerve going to the brain.

Yin bats rely more heavily on constant frequency sounds for echolocation, while Yang bats use a more complex, modulated frequency. The team’s CT scanning showed that Yin bats, like most non-bat mammals, have a thick canal wall packed with tiny openings for the nerve fibers. However, most Yang bats have an open canal with no wall, allowing for more evolutionary variation of the neurons in the ganglion, which is quite distinctive from other mammals. The Yang bats are also much more evolutionary diverse than Yin bats, with about five times the number of species and more diverse modes of foraging. The team believes that the different ear anatomies may contribute to bat diversification.

“We hypothesize that by developing this new configuration, without the space constraint on the inner ear ganglion, the Yang bats have a greater capacity for the ganglion cells to multiply and different ways to connect to the brain, unlike most other mammals,” Luo said. “A greater size of a ganglion and a greater number of neurons may have contributed to this big evolutionary diversification of bats relying more on frequency modulating echolocation.”

Either way, both methods of echolocation contributed to the incredible evolutionary success of bats, Luo said: “These are different ways of achieving the same goal. It’s like these two types of bats are speaking different dialects of a language.”