Study shows how the brains of Egyptian fruit bats are highly specialized for echolocation and flight, with motor areas of the cerebral cortex 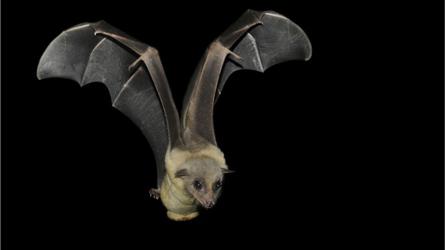 Researchers at the UC Davis Center for Neuroscience mapped the brain regions controlling movements in Egyptian fruit bats. Large regions of motor cortex are dedicated to the tongue, which makes sonar sounds, and coordinated movements of fore- and hindlimbs for flying. (Getty Images)

A new study shows how the brains of Egyptian fruit bats are highly specialized for echolocation and flight, with motor areas of the cerebral cortex that are dedicated to sonar production and wing control. The work by researchers at the University of California, Davis, and UC Berkeley was published May 25 in Current Biology.

Professor Leah Krubitzer’s lab at the UC Davis Center for Neuroscience studies how evolution produces variation in brain organization across a wide variety of mammals, including opossums, tree shrews, rodents and primates. This comparative neurobiology approach shows how both evolution and development influence brain organization.

Although bats represent a quarter of all living mammalian species, this is the first time the full motor cortex of any bat has been mapped, said first author Andrew Halley, a postdoctoral researcher in Krubitzer’s lab.

“What we have found instead is that brain areas represent common synergies of muscles, rather than individual muscles,” Krubitzer said.

The Egyptian fruit bat (Rousettus aegyptiacus) is unusual among bats because it echolocates using its tongue, rather than its larynx (the latter being the method used by most echolocating bats). Egyptian fruit bats are known to have precise motor control of their tongue and are able to aim sonar beams in different directions simply by manipulating their tongues within their mouths, without moving their heads.

Correspondingly, the animal’s motor cortex has an unusually large region that represents movements of the tongue, Halley said. More than 40% of the sensory and motor cortex that was stimulated produced tongue movements — far more than in other species that have been studied, such as primates and rodents.

This study is part of a larger comparative project in Krubitzer’s laboratory that has shown motor regions of the brain are organized according to differences in their bodies and behaviors. “If you look at a rhesus macaque, a huge amount of the cortex is devoted to gripping,” Krubitzer said. Similarly, in humans, the hands are heavily represented.

Coordinating forelimbs and hindlimbs for flight

A bat’s wing is composed of membranes that spread across the “fingers” of its forelimb and back to its hindlimb and tail. Movement of any of these body parts can affect the shape of the wing and change the path of flight. The researchers found that few areas of motor cortex represented forelimb movement alone. Instead, the vast majority of cortex represented synergistic shoulder and hindlimb movements. This reflects the fact that when these bats fly, the power for wing movement comes from shoulder muscles, while the fine adjustments needed for flying come from coordinated movements of shoulder and hindlimb muscles.

While forelimb movements were usually coupled with those of the hindlimb, other areas of cortex did produce movements of the hindlimb muscles alone. These are likely involved in the bats’ locomotor behaviors, “walking” around in trees by gripping branches with their hindlimbs.

Looking at brain organization in a wide variety of mammals helps us better understand our own brains, Krubitzer said.

“When we can look across species, it becomes a really powerful approach for making extrapolations to the human condition,” she said.