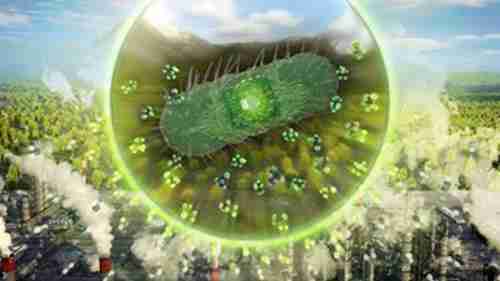 Bacteria are known for breaking down lactose to make yogurt and sugar to make beer. Now researchers led by Northwestern University and LanzaTech have harnessed bacteria to break down waste carbon dioxide (CO2) to make valuable industrial chemicals.

In a new pilot study, the researchers selected, engineered and optimized a bacteria strain and then successfully demonstrated its ability to convert CO2 into acetone and isopropanol (IPA).

Not only does this new gas fermentation process remove greenhouse gases from the atmosphere, it also avoids using fossil fuels, which are typically needed to generate acetone and IPA. After performing life-cycle analysis, the team found the carbon-negative platform could reduce greenhouse gas emissions by 160% as compared to conventional processes, if widely adopted.

“The accelerating climate crisis, combined with rapid population growth, pose some of the most urgent challenges to humankind, all linked to the unabated release and accumulation of CO2 across the entire biosphere,” said Northwestern’s Michael Jewett, co-senior author of the study. “By harnessing our capacity to partner with biology to make what is needed, where and when it is needed, on a sustainable and renewable basis, we can begin to take advantage of the available CO2 to transform the bioeconomy.”

Jewett is the Walter P. Murphy Professor of Chemical and Biological Engineering at Northwestern’s McCormick School of Engineering and director of the Center for Synthetic Biology. He co-led the study with Michael Koepke and Ching Leang, both researchers at LanzaTech.

Necessary industrial bulk and platform chemicals, acetone and IPA are found nearly everywhere, with a combined global market topping $10 billion. Widely used as a disinfectant and antiseptic, IPA is the basis for one of the two World Health Organization-recommended sanitizer formulas, which are highly effective in killing the SARS-CoV-2 virus. And acetone is a solvent for many plastics and synthetic fibers, thinning polyester resin, cleaning tools and nail polish remover.

While these chemicals are incredibly useful, they are generated from fossil resources, leading to climate-warming CO2 emissions.

To manufacture these chemicals more sustainably, the researchers developed a new gas fermentation process. They started with Clostridium autoethanogenum, an anaerobic bacterium engineered at LanzaTech. Then, the researchers used synthetic biology tools to reprogram the bacterium to ferment CO2 to make acetone and IPA.

By harnessing our capacity to partner with biology to make what is needed, where and when it is needed, on a sustainable and renewable basis, we can begin to take advantage of the available CO2 to transform the bioeconomy.”

“These innovations, led by cell-free strategies that guided both strain engineering and optimization of pathway enzymes, accelerated time to production by more than a year,” Jewett said.

The Northwestern and LanzaTech teams believe the developed strains and fermentation process will translate to industrial scale. The approach also could potentially be applied to create streamlined processes for generating other valuable chemicals.

“This discovery is a major step forward in avoiding a climate catastrophe,” said Jennifer Holmgren, LanzaTech CEO. “Today, most of our commodity chemicals are derived exclusively from new fossil resources such as oil, natural gas or coal. Acetone and IPA are two examples with a combined global market of $10 billion. The acetone and IPA pathways developed will accelerate the development of other new products by closing the carbon cycle for their use in multiple industries.”

The study was published on Feb. 21 in the journal Nature Biotechnology.