Engineered bacteria can solve challenges of extracting rare earth elements from ore; the substances are vital for modern life 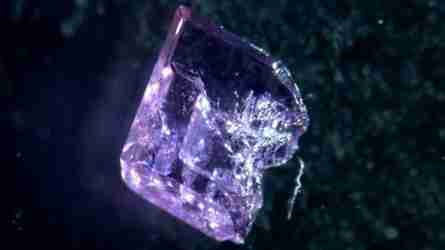 A lab-grown crystal of a synthetic form of the rare earth mineral, monazite, shows extensive damage to one face after exposure to bio-leaching compound generated by Gluconobacter oxydans. Brian Balta/Provided

Cornell researchers are engineering bacteria to solve challenges of extracting rare earth elements from ore; the substances are vital for modern life but refining them after mining is costly, harms the environment and mostly occurs abroad.

The elements – of which there are 15 in the periodic table ­– are necessary for everything from computers, cell phones, screens, microphones, wind turbines, electric vehicles and conductors to radars, sonars, LED lights and rechargeable batteries.

A new study describes a proof of principle for engineering a bacterium, Gluconobacter oxydans, that takes a big first step towards meeting skyrocketing rare earth element demand in a way that matches the cost and efficiency of traditional thermochemical extraction and refinement methods and is clean enough to meet U.S. environmental standards.

“We’re trying to come up with an environmentally friendly, low-temperature, low-pressure method for getting rare earth elements out of a rock,” said Buz Barstow, the paper’s senior author and an assistant professor of biological and environmental engineering in the College of Agriculture and Life Sciences.

Alexa Schmitz, a postdoctoral researcher in Barstow’s lab, is first author of the study, “Generation of a Gluconobacter oxydans knockout collection for improved extraction of rare earth elements,” published Nov. 18 in Nature Communications.

While the U.S. once refined its own rare earth elements, that production stopped more than five decades ago. Now, refinement of these elements takes place almost entirely in other countries, particularly China.

“The majority of rare earth element production and extraction is in the hands of foreign nations,” said co-author Esteban Gazel, associate professor of earth and atmospheric sciences in the College of Engineering. “So for the security of our country and way of life, we need to get back on track to controlling that resource.”

Current methods rely on dissolving rock with hot sulphuric acid, followed by using organic solvents to separate very similar individual elements from each other in a solution.

“We want to figure out a way to make a bug that does that job better,” Barstow said.

G. oxydans is known for making an acid called biolixiviant that dissolves rock; the bacteria uses the acid to pull phosphates from rare earth elements. The researchers have begun to manipulate G. oxydans’ genes so it extracts the elements more efficiently.

To do so, the researchers used a technology that Barstow helped develop, called Knockout Sudoku, that allowed them to disable the 2,733 genes in G. oxydans’ genome one by one. The team curated mutants, each with a specific gene knocked out, so they could identify which genes play roles in getting elements out of rock.

Schmitz identified genes involved in two systems in G. oxydans; one that puts the brakes on acidification and another that accelerates it. “We believe that this mutant can’t tell when it’s had enough phosphate, so it keeps producing acidic biolixiviant to dissolve more,” Schmitz said. The team is also working to find ways to regulate the gene that accelerates acid production. They hope to create a system where bacteria run on cheap cellulose-derived sugars for energy.

In the study, Gazel’s lab helped develop mass spectrometry techniques with the support of co-author Matt Reid, assistant professor of civil and environmental engineering, which Schmitz used to measure concentrations of rare earth elements from solutions where mutants were exposed to ore. “For some of the mutants, they were able to get very high concentrations [of rare earth elements from ore],” Gazel said.

“I am incredibly optimistic,” Gazel said. “We have a process here that is going to be more efficient than anything that was done before.”

The study was funded by the Cornell Atkinson Center for Sustainability, the Cornell Energy Systems Institute, the Burroughs Welcome Fund and the Advanced Research Projects Agency–Energy.