Research could untether patients from bulky cuffed devices by applying small strips of graphene to the skin to collect cardiovascular data. 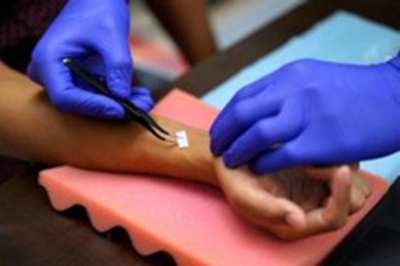 The tattoos are made of graphene, which is an ultra-flexible and strong material that’s nearly invisible on the skin. Laura McKenzie/Texas A&M Division of Marketing & Communications

In the near future, continuously and unobtrusively monitoring your blood pressure could be as easy as applying a temporary tattoo.

Dab some water onto a thin strip of paper applied to the wrist, wait a few seconds, and then remove the backing to reveal the nearly undetectable “e-tattoo” – that’s the idea behind a new innovation from Texas A&M University researchers.

At-home blood pressure devices currently on the market work much like the traditional machines used at the doctor’s office: a cuff squeezes around the patient’s arm to get a reading. It’s a relatively old technology, invented more than 100 years ago. Lead researcher Roozbeh Jafari said the devices are effective, but have their drawbacks.

“The problem is you can measure the blood pressure once or twice a day, if you’re lucky,” said Jafari, a professor of biomedical engineering, computer science and engineering, and electrical and computer engineering at Texas A&M. “Because blood pressure is such an important metric, we want that to happen more frequently.”

The solution: a cuffless device that can take accurate measurements around-the-clock. This is why researchers turned to the graphene-based “tattoos.”

In a recent paper published in the journal Nature Nanotechnology, the researchers describe the device they developed that can attach to the skin of the wrist and be worn comfortably for up to 24 hours. Jafari, principal investigator and co-author of the study, said it can continuously monitor the wearer’s blood pressure with incredible accuracy, which is needed to provide a holistic view of the entire cardiovascular system.

Unlike a bulky, cuff-based device, the e-tattoo is practically undetectable when applied to the skin. The tattoos are made of graphene – which Jafari said is effectively the same material used in graphite pencils – an ultra-flexible and strong material that adheres to the skin directly over a person’s arteries. Once applied, the tattoo is invisible and weightless, Jafari said, and can remain in place for up to a week.

Texas A&M electrical engineering doctoral student Kaan Sel, who co-authored the study, explains that the tattoo itself is the interface for the device. Circuits connected to the skin would send the information to a computer, which would use a machine-learning algorithm to interpret the biometric data.

Kaan said the new technology uses bioimpedance, a technique that involves the response of blood flow to an electrical current. Smartwatches currently on the market rely on optical systems to measure blood pressure by using light sensors to illuminate the skin.

Not only can smartwatches move around on the wrist, Kaan said, they’re often inaccurate. The light sensors are often unable to penetrate darker skin tones, and also have trouble capturing information when the user has a higher BMI.