Using the recently launched James Web Space Telescope, scientists have spotted a galaxy group that formed in the early universe around a quasar. 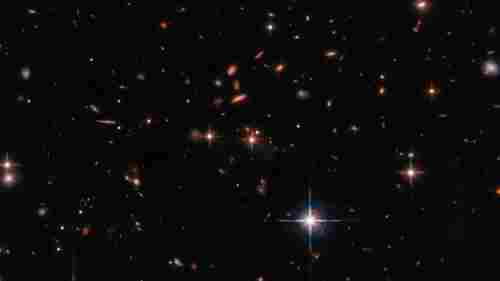 Using the recently launched James Web Space Telescope, a team of scientists that includes a University of Maryland astronomer has spotted a galaxy group that formed in the early universe around a quasar—a bright deep-space object powered by a supermassive black hole.

The discovery expands the scientific community’s understanding of how galaxies first coalesced into the cosmic web that we see today, and was enabled by the telescope’s spectroscopic capability and unparalleled infrared sensitivity. The finding was published in a paper available online and is forthcoming in The Astrophysical Journal Letters.

“We are witnessing the formation of a massive cluster of galaxies—with a mass nearly a hundred times that of our own Milky Way galaxy—only 2.5 billion years after the Big Bang,” said Professor Sylvain Veilleux, co-author and co-principal investigator of the study. “There are very few, if any, cases like this where structure formation on such a massive scale has been confirmed kinematically, or by using the velocities of the galaxies.”

The object the team discovered is an “extremely red” quasar that existed 11.5 billion years ago. Quasars are a rare, incredibly luminous type of active galactic nucleus (AGN)—a compact region at the center of a galaxy that emits enough electromagnetic radiation to outshine all the galaxy’s stars. This quasar is one of the most powerful known galactic nuclei spotted at such an extreme distance. Astronomers had speculated that the quasar’s extreme emission could cause a “galactic wind,” pushing free gas out of its host galaxy and possibly greatly influencing future star formation there.

Quasars and other AGNs are powered by gas falling into a supermassive black hole at the center of their galaxy. They typically emit vast amounts of light across all wavelengths, but this galactic core is a member of an unusually red class. The galaxy’s light has been further “redshifted”—or moved into the red end of the spectrum, indicating an increase in wavelength—by its vast distance, making Webb the perfect instrument to examine the galaxy in detail.

To investigate the movement of the gas, dust and stellar material in the galaxy, the research team used Webb’s Near Infrared Spectrograph (NIRSpec). It can gather spectra across the telescope’s central field of view at once—rather than capturing readings point by point—enabling researchers to simultaneously examine the quasar, its galaxy and the wider surroundings.

Spectroscopy helped researchers understand the movement of the various outflows and winds surrounding the quasar. Because previous studies by the Hubble Space Telescope, Gemini-North telescope and others called attention to the quasar’s powerful outflows and environment, astronomers had speculated that its host galaxy could be merging with some unseen partner. But they were not expecting Webb’s NIRSpec data to clearly indicate that they were looking at not just one galaxy, but at least three more swirling around it.

“We selected a red quasar for this study because these quasars are known to have some of the fastest outflows on small scales,” Veilleux said. “The primary goal of our project was to spatially map the outflowing gas and get the outflow mass and energetics. The discovery of this protocluster [of galaxies] around the quasar was an unexpected bonus.”

Thanks to the spectra over a broad area, the motions of all this surrounding material could be mapped, resulting in the conclusion that the quasar in question was in fact part of a dense knot of galaxy formation that could be home to billions of planets.

“There are few galaxy protoclusters known at this early time. It’s hard to find them, and very few have had time to form since the Big Bang,” said astronomer Dominika Wylezalek, of Heidelberg University in Germany, who led the study into this quasar. “This may eventually help us understand how galaxies in dense environments evolve … It’s an exciting result.”

The team is planning follow-up observations into this unexpected galaxy protocluster, and hope to use it to understand how dense, chaotic galaxy clusters like this one form, and how it’s affected by the active, supermassive black hole at its heart. The present observations are just the first in a set that will study three quasars with Webb, each at different points in the universe’s past.

This research was completed as part of Webb’s Early Release Science Programs—one small part of Webb’s investigations of the universe. In August, it detected the first evidence of carbon dioxide in an exoplanet’s atmosphere—a finding that UMD astronomers Eliza Kempton and Thaddeus Komacek contributed to.