Study shows that one specific set of antibodies that is induced naturally by gut beneficial bacteria can be transferred from mothers to infants through breast milk and help infants defend against infection-induced diarrheal illness. 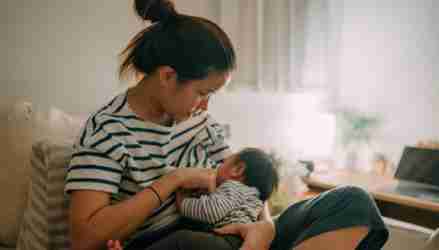 Researchers have known for some time that maternal breast milk provides critical nutrients for newborns, and antibodies from mothers vaccinated against a specific disease-causing bacterium or virus can be transferred via breast milk to babies. Now a new preclinical study by Weill Cornell Medicine investigators shows that one specific set of antibodies that is induced naturally by gut beneficial bacteria can be transferred from mothers to infants through breast milk and help infants defend against infection-induced diarrheal illness.

The study suggests boosting these “naturally-produced” antibodies in mothers might enhance infants’ immunity against bacterial pathogens that cause infectious gastrointestinal diseases.

In the study, published June 10 in Science Immunology, the team focused on a class of antibodies called IgG, which help rid the body of infectious bacteria and viruses. Little was known about how IgG antibodies that are naturally induced by gut bacteria influence infant gut immunity. So the investigators used a mouse model to determine how these IgG antibodies are transferred from a mother’s blood to her breast milk and how they protect young mice from Citrobacter rodentium (equivalent to pathogenic E. coli in humans) that causes potentially dangerous intestinal infections.

“We found that these IgG antibodies were protective against gut infection in the babies and that we could enhance this protection,” said senior author Melody Zeng, an assistant professor of immunology in pediatrics within the Department of Pediatrics and a member of the Gale and Ira Drukier Institute for Children’s Research at Weill Cornell Medicine.

Just as antibodies against the SARS-CoV-2 virus are detected in the breast milk of women who had been vaccinated with mRNA vaccines for COVID-19, the researchers sought to confer extra protection against intestinal infections in infants by inducing IgG antibodies that could be transferred this way. They developed a vaccine using a component found in gut bacteria, then immunized female mice with it before they became pregnant.

“The same concept, in which vaccination enhances mothers’ IgG antibody levels and transfers this immunity to her babies, could protect human babies,” Zeng said. “This strategy could especially benefit premature babies, since they tend to be at much higher risk from diarrheal diseases.”

Such infections pose significant dangers for young children in general. Diarrheal illnesses are the second leading cause of death among children under five, according to the World Health Organization.

In their experiments, the researchers, including co-first authors Katherine Sanidad and Mohammed Amir, both postdoctoral associates in the Zeng lab, first demonstrated that when passed to infant mice through breast milk, IgG prevented disease-causing bacteria from attaching themselves to the lining of infants’ intestines, an early step in infection.

They also studied how IgG interacted with another set of microbes – beneficial bacteria that live in the gut – to facilitate healthy development of gut bacteria in infants. Scientists are finding that these microbes contribute to the development and function of the immune system. For instance, helpful bacteria train the immune system to recognize their pathogenic relatives.

This study uncovered long-term effects of these protective IgG antibodies too. Mice that never received IgG from their mothers developed abnormal microbial communities within their guts, which led to changes to their immune systems. Specifically, the researchers found an increase in gut immune cells that produce IL-17, a proinflammatory cytokine that is linked to inflammatory diseases. As adults, the IgG-deprived mice were more susceptible to abnormal inflammation associated with inflammatory bowel disorder.

“Our findings really underscore the benefits of breastfeeding, both immediately and for the long-term development of the immune system in the offspring,” Zeng said.