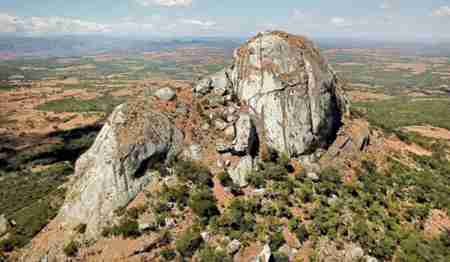 Hora Rockshelter in Malawi, where recent excavations uncovered two of the individuals analyzed in a collaborative study of ancient DNA. (Photo by Jacob Davis)

A new analysis of ancient human DNA demonstrates that people moved and chose their reproductive partners along complex social networks that stretched across large swathes of Africa between 80,000 and 20,000 years ago, according to a study co-led by Yale anthropologist Jessica Thompson.

These movements continued for tens of thousands of years before people began to live more locally, and long before they began farming and keeping livestock.

The study, published Feb. 23 in the journal Nature, provides the first genetic evidence of major demographic changes among hunter-gatherer populations in eastern and south-central Africa during the last Ice Age. The analysis includes the earliest DNA extracted from ancient human remains in Africa and the oldest from anywhere in the tropics.

The findings reveal that these foragers shared genetic connections across a region that now stretches thousands of miles, from Ethiopia to South Africa, and into the central African rainforest. They also support hypotheses developed by archaeologists that demographic shifts accompanied well-documented changes in material culture that occurred in the Later Stone Age, starting about 50,000 years ago, said Thompson, an assistant professor of anthropology in Yale’s Faculty of Arts and Sciences.

“The earliest innovation of things like personal ornaments and clothing took place in Africa as far back as 130,000 years, but around 50,000 years ago, we start to see an overall increase in the complexity and diversity of human-made objects,” said Thompson. “Seeing this widespread genetic mixing shows that people really were moving a lot, exchanging their genes and ideas.”

The study’s 41 co-authors include scholars from institutions in Malawi, Kenya, Zambia, South Africa, and Tanzania. Thompson helped lead the research, along with researchers from Harvard University, Rice University, and the University of Alberta. Yale graduate student Alex Bertacchi is a co-author of the paper and assisted Thompson with the 2019 excavations in Malawi that recovered two of the earliest skeletons examined in the study. He is studying animal remains from the same site for his dissertation.

The researchers analyzed the DNA of 34 ancient individuals to discern the ancestral relationships of people who lived throughout sub-Saharan Africa. Their analysis included new DNA from six individuals who lived between 5,000 and 18,000 years ago from five sites in eastern and south-central Africa. The three oldest skeletons — two excavated in Malawi and one in Tanzania — date from between 14,000 and 18,000 years old, accounting for the earliest human DNA recovered in Africa. Additionally, the researchers analyzed DNA from 28 previously studied ancient Africans, including newly enhanced genetic data from 15 of those individuals.

Recent DNA has limited usefulness in reconstructing the makeup of ancient populations due to the enormous amount of demographic change that has occurred over the past 5,000 years following the spread of organized food production — agriculture and livestock herding. Understanding earlier population dynamics requires analyzing the DNA of hunter-gatherers who preceded the rise of food production, explained Thompson. It is a challenging task because DNA degrades quickly in the heat and moisture of tropical Central Africa, she said.

“At the start of this project, colleagues told me that the sites would not be very old, or that DNA could not be recovered from them, or that modern DNA was sufficient to understand these ancient dynamics,” Thompson said. “None of that turned out to be true. There is still much left in this record to surprise us, if we only invest in looking.”

The three individuals Thompson’s team discovered in Malawi were infants. Thompson excavated them from sites that more than 70 years ago had yielded other ancient human skeletons. Thompson was digging for artifacts to put the lives of those individuals into context when her team unearthed two small skeletons from one site. Their depth beneath the surface suggested that they were significantly older than previous finds. Both skeletons featured well-preserved ear bones, which are one of the best skeletal sources for recovering ancient human DNA.

“I had never found anything like them,” Thompson said. “When we saw that those tiny ear bones were preserved, we just couldn’t believe it. Their age alone was important, but when we saw those bones, we knew that ancient DNA might also be a real possibility.”

The ear bones visited Yale where they were analyzed in a micro-CT scanner, which captured detailed data about their composition that can support later research. The bones then travelled to the laboratory of study co-author David Reich, a professor of genetics at Harvard University, where their DNA was extracted and analyzed. All other remains were left in the care of the Malawi Department of Museums and Monuments.

The discovery of high amounts of Central African ancestry in individuals from eastern and southern Africa was a key finding, said Mary Prendergast, associate professor of anthropology at Rice University and a senior author of the study.

“Clearly a lot of people were moving from what are Central African rain forests today to places south and east, which surprised us,” said Prendergast. “It suggests to archaeologists that we should focus more attention on Central Africa, which has been understudied due to limited funding, geographic challenges, and geopolitical instability.”

The researchers estimate that the period of demographic shifting began as far back as 80,000 years ago and lasted until about 20,000 years ago, when the amount of movement and mixing between populations declined, and people began living locally.

“It’s possible that at this point people had established networks and could move technology and information without finding reproductive partners elsewhere,” said Elizabeth Sawchuk, a postdoctoral fellow at the University of Alberta, Canada, who helped lead the study. “Their social networks persisted, and objects continued to move along them until about 5,000 years ago when that ancient structure was overwritten by more recent demographic change.”

The research team credited colleagues and curators from museums in Africa for protecting and preserving the remains that formed the basis of the study.

“This work shows why it is so important to invest in the stewardship of human remains and archaeological artifacts in African museums,” said Potiphar Kaliba, director of research at the Malawi Department of Museums and Monuments, and a co-author of the study, adding that some of the skeletons yielded usable genetic information despite being excavated a half-century ago.