An arms race that plays out in a single genome

Study sheds light on an example of coevolution in fruit flies that has implications for human health. 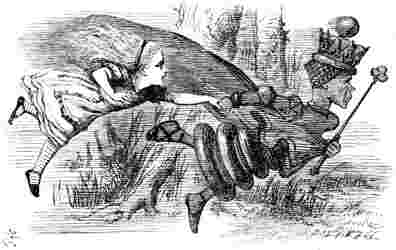 Like Alice furiously running to keep up with the Red Queen, but remaining in one place, two genetic elements in the fruit fly genome are engaged in an evolutionary arms race to simply keep the biological status quo, according to new research by Penn scientists. (Image: John Tenniel in Lewis Carroll’s Through the Looking Glass)

Biological arms races are commonplace in nature. Cheetahs, for example, have evolved a sleek body form that lends itself to rapid running, enabling them to feast upon similarly speedy gazelles, the fastest of which may evade predation. On the molecular level, immune cells produce proteins to conquer pathogens, which may in turn evolve mutations to evade detection.

Though less well known, other games of one-upmanship unfold within the genome. In a new study, biologists at the University of Pennsylvania show, for the first time, evidence of a two-sided genomic arms race involving stretches of repetitive DNA called satellites. “Opposing” the rapidly evolving satellites in the arms race are similarly fast-evolving proteins that bind those satellites.

While satellite DNA does not encode genes, it can contribute to essential biological functions, such as formation of molecular machines that process and maintain chromosomes. When satellite repeats are improperly regulated, impairments to these crucial processes can result. Such disruptions are hallmarks of cancer and infertility.

Using two closely related species of fruit flies, researchers probed this arms race by purposefully introducing a species mismatch, pitting, for example, one species’ satellite DNA against the other species’ satellite-binding protein. Severe impairments to fertility were a result, underscoring evolution’s delicate balance, even at the level of a single genome.

“We typically think of our genome as a cohesive community of elements that make or regulate proteins to build a fertile and viable individual,” says Mia Levine, an assistant professor of biology in Penn’s School of Arts & Sciences and the senior author on the work, published in Current Biology. “This evokes the idea of a collaboration between our genomic elements, and that’s largely true.

“But some of these elements, we think, actually harm us,” she says. “This disquieting idea suggests that there needs to be a mechanism to keep them in check.”

The researchers’ findings, likely to also be relevant in humans, suggest that when satellite DNA occasionally escapes the management of satellite-binding proteins, significant costs to fitness can occur, including impacts on molecular pathways required for fertility and perhaps even those relevant in the development of cancer.

“These findings indicate that there is antagonistic evolution between these elements that can impact these seemingly conserved and essential molecular pathways,” says Cara Brand, a postdoc in Levine’s lab and first author on the work. “It means that, over evolutionary time, constant innovation is required to maintain the status quo.”

It’s long been known that the genome is not composed solely of genes. In between genes that give rise to proteins one can find long stretches of what Levine calls “gobbledygook.”

“If genes are words and you were to read the story of our genome, these other parts are incoherent,” she says. “For a long time, it was ignored as genomic junk.”

Satellite DNA is part of this so-called “junk.” In Drosophila melanogaster, the fruit fly species often used as a scientific model organism, satellite repeats make up roughly half the genome. Because they evolve so rapidly without any apparent functional consequence, however, scientists used to believe satellite repeats were unlikely to be doing anything useful in the body.

But more recent work has revised this “junk DNA” theory, revealing that the “gobbledygook,” satellite repeats included, plays a variety of roles, many related to maintaining genome integrity and structure in the nucleus.

“So this presents a paradox,” Levine says. “If these regions of the genome that are highly repetitive actually do important jobs, or, if not managed properly, can be harmful, it suggests that we need keep them in check.”

In 2001, a group of scientists put forward a theory, suggesting that coevolution was taking place, with the satellites rapidly evolving and satellite binding proteins evolving to keep up. In the two decades since, scientists have offered support to the theory. With genetic manipulation, these studies have introduced a satellite-binding protein from one species into the genome of a closely related species and observed what happens as a result of the mismatch.

“Often these gene swaps cause dysfunction,” says Brand, “particularly disrupting a process that is usually mediated by regions of the genome that are enriched with repetitive DNA.”

New tools to prove the case

These investigations lent support to the coevolution theory. But until researchers could experimentally manipulate both the satellite-binding protein and the satellite DNA, it would be impossible to prove that the disruption they observed arose because of an interaction between the two elements.

In the current work, Levine and Brand found a way to do just that. Another fruit fly species, Drosophila simulans, lacks a satellite repeat that spans a whopping 11 million nucleotide base pairs found in its close relative, D. melanogaster. This satellite was known to occupy the same cellular location as a protein called Maternal Haploid (MH). The researchers also had access to a mutant strain of D. melanogaster that lack the 11 million base pair repeat.

“It turns out the fly can live and reproduce just fine without this repeat,” Levine says. “So it gave us a unique opportunity to manipulate both sides of the arms race.”

To first investigate the satellite-binding protein side, the researchers used the CRISPR/Cas9 gene editing system to remove the original MH gene from D. melanogaster and add back the D. simulans version of the gene. Compared to control females, female flies with the D. simulans MH gene had significantly reduced fertility, producing substantially fewer eggs.

Flies that lacked MH altogether, however, were unable to produce any offspring; the embryos were not viable.

“This was interesting because it showed that these satellite-binding proteins are essential, even though they’re rapidly evolving,” says Brand. “Doing the gene swap showed us that we could rescue the ability to make embryos. But another function, related to the ovary and egg production, was impaired.”

Looking closely at the ovaries, Brand and Levine discovered that the apparent cause of reduced egg formation and atrophied ovaries was DNA damage. Such damage often triggers a checkpoint protein to stop developmental pathways. When the researchers repeated the experiments in a fly with a broken checkpoint protein, egg production levels were restored to a higher level.

Levine and Brand were then ready to test the other side of the coevolutionary arms race, to find evidence that the problems that arose with the swapped MH protein were due to an incompatibility with the 11 million base pair satellite, or if they were acting on a different genetic element. Here they relied on the D. melanogaster strain that was missing the repeat and found that the gene swap now had no effect on these flies. DNA damage levels, egg production, and ovary size were all normal.

Looking to the closest relative of the MH protein in humans, a protein called Spartan, gave the scientists a clue as to the mechanism behind these results. In humans, Spartan is understood to digest proteins that can get stuck on DNA, posing an obstacle to various processes and packaging that DNA must undergo. “After everything we'd discovered thus far,” Levine says, “we thought, maybe this wrong species version of the protein is chewing up something it shouldn't.”

One of the proteins often targeted by Spartan is Topoisomerase II, or Top2, an enzyme that can help resolve tangles in tightly wound and entangled DNA. To see whether the negative effects of the MH gene mismatch owed to inappropriate degradation of Top2, they overexpressed Top2 and found fertility was restored. Reducing Top2, on the other hand, exacerbated the reduction in fertility.

“This repair process that MH is involved in happens in yeast, in flies, in humans, across the tree of life,” says Brand. “Yet we’re seeing rapid or adaptive evolution of these proteins involved. That suggests that this seemingly conserved and essential pathway requires evolutionary innovation.” In other words, coevolution must proceed apace, just to maintain this essential pathway.

In future work, Brand and Levine will be looking to see if segments of the genome beyond satellites are involved and will be looking in other organisms, including mammals, to drill down into the molecular players of these evolutionary arms races.

“There’s no reason to believe that these arms races are playing out only in flies,” Levine says. “The same types of proteins and satellites in primates also evolve rapidly and that tells us that what we are studying is broadly relevant.”

The focal genes involved in this study have important roles in human health. Spartan mutations have been associated with cancer and ineffective regulation of satellite DNA could shed light on infertility and miscarriage.

“The number of miscarriages is remarkably high, and certainly satellite DNA is an unprobed source of aneuploidy and genome instability,” Levine says.

Mia Levine is an assistant professor in the Department of Biology in the University of Pennsylvania’s School of Arts & Sciences.

Cara Brand is a postdoctoral researcher in Penn’s Department of Biology in the School of Arts & Sciences.