Boosting levels of the neurotransmitter norepinephrine with atomoxetine, a repurposed ADHD medication, may be able to stall neurodegeneration 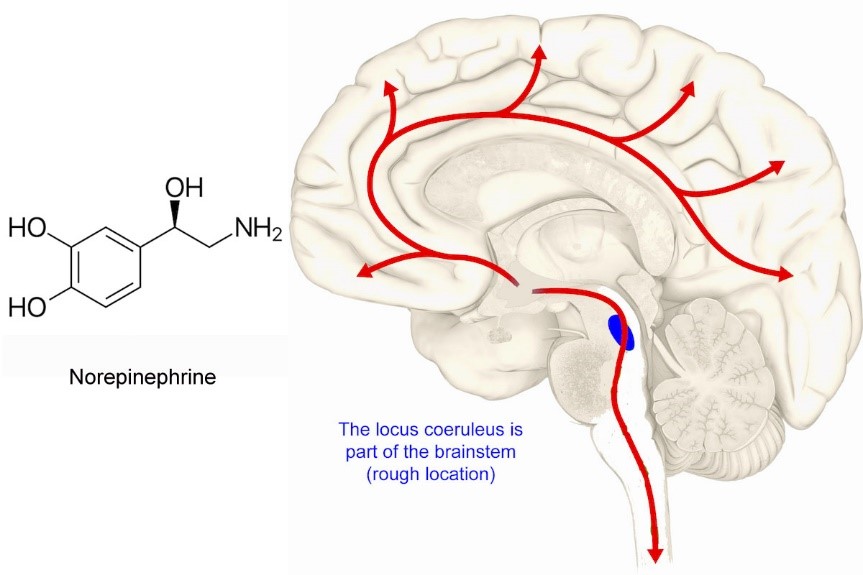 Norepinephrine is a neurotransmitter produced mainly by the locus coerueus, part of the brain stem. Boosting its levels may help stall Alzheimer's-related neurodegeneration.

Boosting levels of the neurotransmitter norepinephrine with atomoxetine, a repurposed ADHD medication, may be able to stall neurodegeneration in people with early signs of Alzheimer’s disease, a study conducted at Emory Brain Health Center suggests.

The results were published on Dec. 17 in the journal Brain.

This is one of the first published clinical studies to show a significant effect on the protein Tau, which forms neurofibrillary tangles in the brain in Alzheimer’s. In 39 people with mild cognitive impairment (MCI), six months of treatment with atomoxetine reduced levels of Tau in study participants’ cerebrospinal fluid (CSF) and normalized other markers of neuro-inflammation.

The study points toward an alternative drug strategy against Alzheimer’s that does not rely on antibodies against Tau or another Alzheimer’s-related protein, beta-amyloid. A recent FDA-approved drug, adacanumab, targets beta-amyloid but its benefits are controversial among experts in the field.

Larger and longer studies of atomoxetine in MCI and Alzheimer’s are warranted, the Emory researchers concluded. The drug did not have a significant effect on cognition or other clinical outcomes, which was expected given the relatively short study duration.

“One of the major advantages of atomoxetine is that it is already FDA-approved and known to be safe,” says senior author David Weinshenker, PhD, professor of human genetics at Emory University School of Medicine. “The beneficial effects of atomoxetine on both brain network activity and CSF markers of inflammation warrant optimism.”

“We are encouraged by the results of the trial,” says lead author Allan Levey, MD, PhD, professor of neurology at Emory University School of Medicine and director of the Goizueta Institute @Emory Brain Health. “The treatment was safe, well tolerated in individuals with mild cognitive impairment, and modulated the brain neurotransmitter norepinephrine just as we hypothesized. Moreover, our exploratory studies show promising results on imaging and spinal fluid biomarkers which need to be followed up in larger studies with longer period of treatment.”

Emory researchers picked atomoxetine, which is commercially available as Strattera, with the goal of boosting brain levels of norepinephrine, which they thought could stabilize a vulnerable region of the brain against Alzheimer’s-related neurodegeneration.

Norepinephrine is produced mainly by the locus coeruleus, a region of the brainstem that appears to be the first to show Alzheimer’s-related pathology — even in healthy, middle-aged people. Norepinephrine is thought to reduce inflammation and to encourage trash-removing cells called microglia to clear out aggregates of proteins such as beta-amyloid and Tau. Increasing norepinephrine levels has positive effects on cognition and pathology in mouse and rat models of Alzheimer’s.

“Something that might seem obvious, but was absolutely essential, was our finding that atomoxetine profoundly increased CSF norepinephrine levels in these patients,” Weinshenker says. “For many drugs and trials, it is very difficult to prove target engagement. We were able to directly assess target engagement.”

Weinshenker also emphasized that the trial grew out of pre-clinical research conducted in animal models, which demonstrated the potential for norepinephrine.

“The entire idea of using atomoxetine to treat mild cognitive impairment and Alzheimer’s disease came from research using rodents to model and manipulate aspects of these disorders and would not have been possible without funding from the National Institutes of Health, the Alzheimer’s Association, the Alzheimer’s Drug Discovery Foundation and private donors,” he says. “Supporting animal research is crucial for biomedical breakthroughs in the neurodegeneration field.”

Study participants were all diagnosed with mild cognitive impairment and had markers of potential progression to Alzheimer’s in their CSF, based on measuring Tau and beta-amyloid. More information about inclusion criteria is available at clinicaltrials.gov.

Researchers measured levels of dozens of proteins in participants’ CSF; the reduction of Tau from atomoxetine treatment was small — about 5% over six months — but if sustained, it could have a larger effect on Alzheimer’s pathology. No significant effect on beta-amyloid was seen.

In addition, in participants taking atomoxetine, researchers were able to detect an increase in metabolism in the medial temporal lobe, critical for memory, via PET (positron emission tomography) brain imaging.

Study participants started with a low dose of atomoxetine and ramped up to a higher dose, up to 100 mg per day. Participants did experience weight loss (4 pounds, on average) and an increase in heart rate (about 5 beats per minute) while on atomoxetine, but they did not display a significant increase in blood pressure. Some people reported side effects such as gastrointestinal symptoms, dry mouth or dizziness.

The FDA approved atomoxetine in 2002 for ADHD (attention deficit hyperactivity disorder) in children and adults, and the drug has been shown to be safe in older adults. It is considered to have low abuse potential, compared with conventional stimulants that are commonly prescribed for ADHD.

Looking ahead, it is now possible to visualize the integrity of the locus coeruleus in living people using MRI techniques, so that could be an important part of a larger follow-up study, Weinshenker says. Atomoxetine’s effects were recently studied in people with Parkinson’s disease — the benefits appear to be greater in those who have reduced integrity of the locus coeruleus.