Aging slows to a crawl when the animals hibernate

The study shows that the anti-aging phenomenon kicks in once the animals reach 2 years old, their age of sexual maturity. 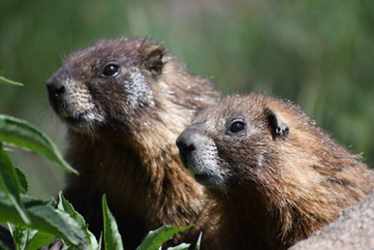 During their time hibernating, marmots’ breathing slows, they burn a single gram of fat per day, and their body temperature plummets to the point that “they feel like fuzzy, cold rocks.” Daniel Blumstein/UCLA

What if you were told there was a completely natural way to stop your body from aging? The trick: You’d have to hibernate from September to May each year.

That’s what a team of UCLA biologists and colleagues studying yellow-bellied marmots discovered. These large ground squirrels are able to virtually halt the aging process during the seven to eight months they spend hibernating in their underground burrows, the researchers report in the journal Nature Ecology and Evolution.

The study, the first to analyze the rate of aging among marmots in the wild, shows that this anti-aging phenomenon kicks in once the animals reach 2 years old, their age of sexual maturity.

The researchers studied marmot blood samples collected over multiple summer seasons in Colorado, when the animals are active above ground, to build statistical models that allowed them to estimate what occurred during hibernation. They assessed the biological aging of the marmots based on what are known as epigenetic changes — hundreds of chemical modifications that occur to their DNA.

“Our results from different statistical approaches reveal that epigenetic aging essentially stalls during hibernation,” said lead author Gabriela Pinho, who conducted the study as a UCLA doctoral student advised by Daniel Blumstein and Robert Wayne, professors of ecology and evolutionary biology. “We found that the epigenetic age of marmots increases during the active season, stops during hibernation and continues to increase in the next active season.”

This process, the researchers said, helps explain why the average life span of a yellow-bellied marmot is longer than would be expected from its body weight.

Hibernation, an evolutionary adaptation that allows animals to survive in harsh seasonal environments where there is no food and temperatures are very low, is common among smaller mammals, like marmots, native to the mountainous western regions of the U.S. and Canada.

The marmots’ hibernation alternates between periods of metabolic suppression that last a week or two and shorter periods of increased metabolism, which generally last less than a day. During metabolic suppression, their breathing slows and their body temperature drops dramatically, to the point that “they feel like fuzzy, cold rocks,” Blumstein said.

In addition, they use a miniscule amount of energy, burning about a single gram of fat a day. “That’s essentially nothing for a 5,000-to-6,000–gram (11–13 lbs.) animal,” Pinho noted. This allows them to save energy and survive long periods without food.

During their active summer season, marmots eat a lot, doubling their weight so that they have sufficient fat to survive the next hibernation period.

All of these hibernation-related conditions — diminished food consumption, low body temperature and reduced metabolism — are known to counter the aging process and promote longevity, the researchers said. This delayed aging is likely to occur in other mammals that hibernate, they said, because the molecular and physiological changes are similar.

“This study is the closest scientists have gotten to showing that biological processes involved in hibernation are important contributors to their longer-than-expected life span based on their body weight,” said Pinho, now a researcher with the nonprofit Institute of Ecological Research’s Lowland Tapir Conservation Initiative in Brazil.

“The fact that we are able to detect this reduced aging during hibernation in a wild population means the effect of hibernation on slowing aging is really strong,” said Blumstein, a member of the UCLA Institute of the Environment and Sustainability and a senior author of the study. “This study was possible only because we had access to blood samples from free-living animals whose ages are known. Not many wild populations have detailed information about individual chronological age, and this reinforces the importance of long-term field projects.”

There may be biomedical advantages to inducing hibernation conditions in humans or human cells, the researchers said — to preserve organs for transplantation, for example, or as part of long-term space missions.

For the current publication, Pinho and her colleagues studied 73 female yellow-bellied marmots throughout their lives and collected blood samples every two weeks over 14 active seasons, analyzing them regularly. The marmots’ chronological age was calculated based on the date at which juveniles first emerged from their natal burrows. (The age of male marmots is difficult to determine, the researchers said, because they often migrate from one area to another.)

The research is part of part of a 60-year study of yellow-bellied marmots based at the nonprofit Rocky Mountain Biological Laboratory in Colorado and was funded by Brazil’s Science Without Borders program, part of the country’s National Counsel of Technological and Scientific Development, and the National Geographic Society, a Rocky Mountain Biological Laboratory research fellowship and the National Science Foundation.

Other senior study authors are Robert Wayne; Matteo Pellegrini, a UCLA professor of molecular, cell and developmental biology; Steve Horvath, a professor of human genetics and biostatistics at UCLA’s Fielding School of Public Health who developed the “epigenetic clock” in 2013; Julien Martin from Canada’s University of Ottawa; and Sagi Snir from Israel’s University of Haifa. The authors received insights from UCLA’s Statistical Consulting Group.