A superstar enzyme is ready for its close-up

A Yale-led team of chemists has unveiled the blueprints for a key enzyme that may contain design principles for a new generation of synthetic solar fuel catalysts. 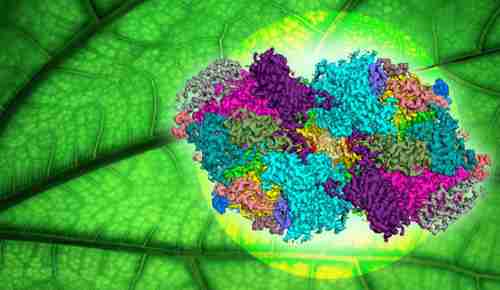 This illustration features a cryo-EM “map” of the photosystem II complex. It is a 3D reconstruction, based on two-dimensional cryo-EM images, with different protein subunits of the complex colored individually.

A Yale-led team of chemists has unveiled the blueprints for a key enzyme that may contain design principles for a new generation of synthetic solar fuel catalysts.

The research, led by Yale’s Gary Brudvig and Christopher Gisriel, uses cryo-electron microscopy on a microorganism called Synechocystis to get an extreme close-up picture of Photosystem II, the enzyme in photosynthesis that uses water as a solar fuel, enabling researchers to observe how the enzyme works.

The study, which appears in the journal Proceedings of the National Academy of Sciences, was co-authored by researchers from the University of California-Riverside, Boston College, and City University of New York.

Photosynthesis is the mechanism by which plants and certain microorganisms, like Synechocystis, use sunlight to synthesize food from carbon dioxide and water — and fill the atmosphere with oxygen as a byproduct. At the heart of photosynthesis is Photosystem II, an enzyme that oxides water molecules, taking away their electrons to use as fuel.

Scientists have long sought ways to mimic this process to create more efficient solar fuel catalysts, by studying Photosystem II from Synechocystis. But without a clear picture of Photosystem II’s molecular structure in Synechocystis, it has been challenging for scientists to understand the results of their experiments.

Previous work led by Yale created a snapshot of Photosytem II from Synechocystis in an “immature” stage, before the enzyme was capable of water oxidation. That work allowed the researchers to better understand how the enzyme is built.

In the new study, the researchers were able to see the enzyme in Synechocystis in its mature, active form, with all of the protein subunits and activity that is present during water oxidation. The observation, made possible by cryo-electron microscopy technology at Yale’s West Campus, offers one of the closest, most detailed looks ever accomplished for Photosystem II in Synechocystis.

“At this resolution, we can see amino acids, small-molecule co-factors, and water molecules that are used in the mechanism of water oxidation,” said Brudvig, the Benjamin Silliman Professor of Chemistry in the Faculty of Arts and Sciences and director of the Energy Sciences Institute at Yale’s West Campus. Brudvig is the study’s corresponding author.

“In some cases, we can even see the contribution of individual protons,” Brudvig added.

With this new, up-close view of Photosystem II from Synechocystis, the researchers say they’ll be able to introduce tiny changes to the enzyme — such as mutating individual amino acids — to see how those changes affect the enzyme’s function.

“The main goal is to understand the chemistry of water oxidation,” said Gisriel, a postdoctoral associate in chemistry and the study’s first author. “What we’ve done here provides a platform from which we can deconstruct the system, providing the design principles for synthetic solar fuel catalysts.”