A star with a heartbeat & without a magnetic field discovered

Scientists spot a peculiar binary star that shows heartbeat but no pulsations contrary to the norm of binary stars of sporting both heartbeats as well as pulsations. 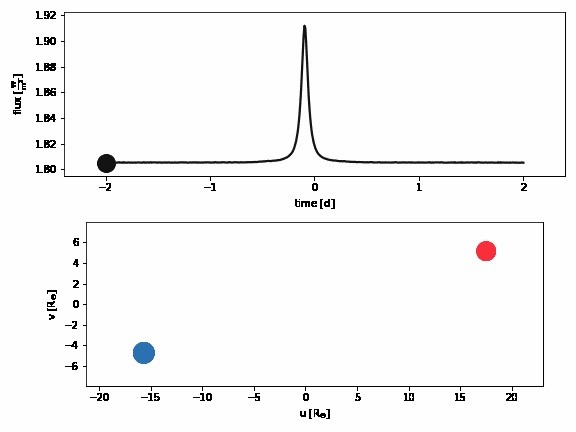 The animation illustrates the synthetic light curve of a heartbeat star due to its orbital motion.

A group of Indian and international scientists have spotted a peculiar binary star that shows heartbeat but no pulsations contrary to the norm of binary stars of sporting both heartbeats as well as pulsations. This star is called HD73619 in Praesepe (M44), located in the Cancer constellation, one of the closest open star clusters to the Earth.

A total of about 180 heartbeat stars are known to date. The name 'Heartbeat' stems from the resemblance of the path of the star to an electrocardiogram of the human heart. These are the binary star systems where each star travels in a highly elliptical orbit around the common centre of mass, and the distance between the two stars varies drastically as they orbit each other. When the stars are at closest passage of binary systems, a sudden increase in integrated brightness with amplitude of the order of several parts-per-thousand (ppt) is observed. As the components move apart, the light variation falls and finally becomes flat, indicating that combined flux is reduced, resulting in alternating peaks and troughs in their light curves. The pulsational activity of such stars is due to the oscillations in the component stars when they are at their closest approach.

A team of 33 scientists, led by Dr. Santosh Joshi from Aryabhatta Research Institute of Observational Sciences (ARIES), an autonomous institution under the Department of Science & Technology (DST), Govt of India, carried out analysis of photometric and high-resolution spectroscopic observations of HD73619 obtained using 8 ground-based telescopes located in different parts of the globe. They have found that HD73619 is the first member of heartbeat systems in binary chemically peculiar stars that does not show any pulsational/vibrational activity at their closest approach. Chemically peculiar stars are those stars which have an unusual abundance of elements heavier than hydrogen and helium on the surface. Their data also revealed that the newly discovered heartbeat star exhibits either very weak or no magnetic field. Absence of weak magnetic field means that any dark spots on the HD73619 may have different and hitherto unknown origin as compared to sunspots which are created by strong magnetic field. The findings have been accepted for publication by Monthly Notices of Royal Astronomical Society, a scientific journal of Oxford University Press.

The discovery is of vital importance for the study of inhomogeneities due to spots in non-magnetic stars and to investigate the origin of the pulsational variability. The research has been the result of the Nainital-Cape survey, one of the longest ground-based surveys to search and study the pulsation variability in a sample of CP stars which was initiated about two decades ago by astronomers of ARIES, Nainital, and South African Astronomical Observatory SAAO, Cape Town. As part of this survey, the group had monitored a few members of Praesepe in the past. The other members of this wide collaboration are from Uganda, Thailand, United States of America, Russia, Belgium, United Kingdom, France, Spain, South Africa, Poland, and Turkey. This joint work is supported by the Department of Science & Technology (DST), Govt. of India, and the Belgian Federal Science Policy Office (BELSPO), Govt. of Belgium under the Belgo-Indian Network for Astronomy and Astrophysics (BINA), project.