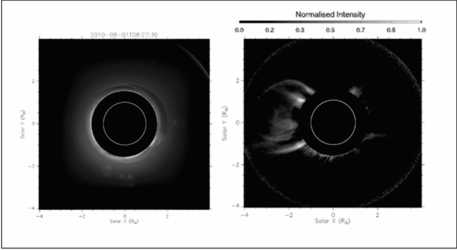 Figure: The left image is taken by space-based coronagraph STEREO/COR-1A on August 1, 2010. The image on the right is after processing it with SiRGraF revealing a large CME at the eastern solar limb.

Researchers have developed a simple technique of separating the constant background of the Solar Colona and revealing the dynamic corona.

The simple approach of subtracting the constant background can improve efficiency of identification of Coronal Mass Ejections (CME) -- events in which a large cloud of energetic and highly magnetized plasma erupts from the solar corona into space, causing radio and magnetic disturbances on the earth. It can also give a clear picture of the characteristics of CMEs and make their study easier.

Coronal mass ejections (CMEs) are dynamic structures in the Solar Corona and are capable of driving the Space Weather in near-Earth space. It becomes imperative to separate such structures and visually or automatically identify the CMEs through the radial distances in the images taken using coronagraphs.

The density of the outermost layer of the atmosphere of the Sun – Corona – decreases with distance radially outwards. As the intensity of the corona observed in white light depends on the density of particles in the atmosphere, it decreases exponentially. If the contrast between the constant corona and transient CMEs is not high, detection of CMEs becomes a challenge.

A new method developed by Mr. Ritesh Patel, Dr. Vaibhav Pant, and Prof. Dipankar Banerjee from Aryabhatta Research Institute of Observational Sciences (ARIES), Nainital, along with Satabdwa Majumdar from the Indian Institute of Astrophysics (IIA), Bengaluru, autonomous institutes under DST, Government of India, called the Simple Radial Gradient Filter (SiRGraF), is capable of separating the background revealing the dynamic corona. This research has been accepted for publication in the Solar Physics journal.

This method, which subtracts the constant background, brings out the transient corona, followed by dividing the result by an azimuthally uniform background to reduce the radial decrease in intensity. A combination of these two steps allows us to identify the structures such as CMEs throughout the field of view of the coronagraph images.

An example of the application of SiRGraF on a white-light coronagraph image of STEREO/COR-1A is shown in Figure 1. The images on the left and right panels are before and after processing by the proposed algorithm, respectively. An interesting aspect of this algorithm is that when a bulk of such images are to be processed, it will take only a few seconds for completion while also maintaining the image quality for scientific analysis.