A new study has found that these appendages, called cilia, on neurons in the brain have a key role in ensuring a specific dopamine receptor’s signals are properly received. 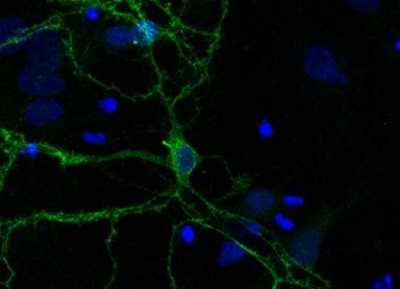 Microscope image of a cultured mouse neuron from the striatum region of the brain labeled with a green fluorescent antibody that detects dopamine receptor 1. The receptor localizes along the cell surface and is enriched in a primary cilium projecting from the cell body. Nuclei are indicated in blue. Image courtesy of Kirk Mykytyn

A historically overlooked rod-like projection present on nearly every cell type in the human body may finally be getting its scientific due: A new study has found that these appendages, called cilia, on neurons in the brain have a key role in ensuring a specific dopamine receptor’s signals are properly received.

The research was conducted in mouse models of a disorder called Bardet-Biedl syndrome, and applies to one of five proteins that regulate dopamine signaling, called dopamine receptor 1. In certain regions of the brain, this receptor can be thought of as an “on” switch that initiates motivated behavior – basically any behavior linked to pursuit of a goal.

he study showed that if the receptor either gets stuck on cilia or never has a chance to localize to these cell “antennae,” messages telling the body to move are reduced.

“There’s something about dopamine receptor 1 needing to get to and from neuronal cilia that’s required for proper signaling,” said lead author Kirk Mykytyn, associate professor of biological chemistry and pharmacology in The Ohio State University College of Medicine. “This is the first demonstration that cilia are important for dopamine receptor 1 signaling.”

The study is published in the Journal of Neuroscience.

Bardet-Biedl syndrome (BBS) is part of a class of human diseases called ciliopathies – caused by dysfunctional cilia on a range of cell types – and is characterized by multiple organ system defects, adult blindness, obesity and intellectual disabilities.

Though the syndrome involves cilia dysfunction throughout the body, Mykytyn’s lab studies the neural component of BBS to determine the role of primary cilia in the brain. Primary cilia are single appendages projecting from each neuronal cell body. Though they don’t get a lot of attention, some cilia functions are well-known: Primary cilia in the olfactory system give humans a sense of smell, and outer segments of photoreceptors, which are modified primary cilia, allow us to see.

“These appendages are present on nearly every cell type in the human body and are ubiquitous throughout the brain,” he said. “Interestingly, we’re just now beginning to understand what their role is.”

Mykytyn previously found that the deletion of BBS proteins in mouse models of Bardet-Biedl syndrome hindered the movement of specific types of receptors to and from primary cilia. The implications could be far-reaching: These G protein-coupled receptors, as a group, are the largest family of cell-surface receptors in mammals, and are the most common family of proteins to be targeted by drugs.

“We wanted to investigate what the consequence might be of disrupting trafficking of a particular G protein-coupled receptor to and from cilia,” he said.

Dopamine receptor 1 is one of those receptors.

In this work, researchers engineered mice whose dopamine receptor 1-expressing neurons either lacked a BBS protein or the machinery needed to develop cilia. As expected, the missing BBS protein caused the receptor to accumulate on these neurons’ cilia, and, surprisingly, the mice became obese. The team also discovered that mice lacking cilia – meaning the receptor had no chance to do whatever it does on cilia – had the same outcome: Interestingly, the mice did not become obese because they overate – instead, the obesity was associated with a significant reduction in activity. They were sedentary, and they got fat. Control mice, by comparison, behaved normally and did not gain weight.

“That tendency to move around less and become obese is consistent with a reduction in dopamine receptor 1 signaling,” Mykytyn said. “The striatum, a region of the brain where these neurons are located, is known to be involved in motivated behavior and movement.

“We knew animals with BBS become obese, and it appeared that this was due to overeating. But what we found here was that when we disrupted BBS proteins just in dopamine receptor 1-expressing neurons, mice got obese not because of overeating, but because they had a significant reduction in motivated behavior,” he said. “The ‘go’ signal is not as high as it should be, and you get these mice that don’t move around as much.”

The electrophysiology lab of co-lead author Candice Askwith, associate professor of neuroscience at Ohio State, determined that these neurons maintained their excitability – further evidence that the diminished receptor signaling did not overtly damage neuronal circuits to cause the behavior outcomes in the mice.

“The idea that cilia are novel targets to modify dopamine-dependent neuronal signaling and motivated behaviors is extremely exciting,” Askwith said.

Beyond providing a potential explanation for obesity in Bardet-Biedl syndrome, the findings suggest primary cilia in the brain are a critical player in proper signaling within the dopaminergic system, which helps regulate motor control, motivation, reward and cognitive function. Further exploration of the link between cilia and receptor signaling could advance drug development for ciliopathies and some neurological disorders, as well, Mykytyn said.