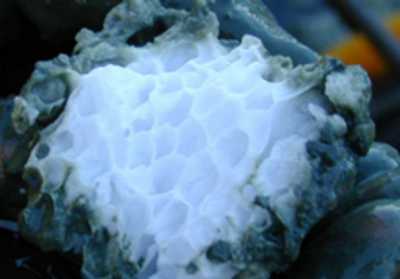 A sample of ice that once held methane gas. Photo Credit: By Wusel007 - Own Work, Cc By-Sa 3.0/Wikipedia

Against the backdrop of a rapidly warming planet, the need to better understand the nature and long-term impact of positive climatic feedback loops — processes that accelerate the effects of warming — becomes critically important.

One way to assess the role and impact of climatic feedback processes is to use modeling studies to look into the likely future based on what we know now. Climate projection models, for instance, are the tools behind the 1.5° C global warming threshold adopted by the Intergovernmental Panel on Climate Change.

Alternatively, you can look into the past to see what happened at a time when the Earth was up to 1-1.5°C warmer than today. That is what UC Santa Barbara’s Syee Weldeab did in a paper published in the Proceedings of the National Academy of Sciences. The professor of paleoclimatology found feedback processes that have concerning implications for our modern, ongoing warming.

To get a paleoclimate perspective on global warming, Weldeab and his colleagues went back some 128,000 to 125,000 years ago to the peak Eemian warm episode. Oceans were up to 1-1.5°C warmer than during the Holocene (our current geological epoch). The authors examined marine sediment from the tropical Atlantic and found exceptionally strong warming of the intermediate water column during a brief interval within the peak Eemian warm episode.

“Remarkably, a substantially diminished Greenland Ice Sheet was capable of producing enough meltwater to perturb the density-driven circulation of the Atlantic Ocean,” Weldeab said. “This contributed significantly to the large warming of the intermediate waters we reconstructed.”

Typically, warm, salty water travels north from the tropics along the surface of the ocean and cools as it reaches northern mid and high latitudes. At this point, the now colder, denser water drops to the deep sea and travels back down toward the tropics. This interplay of density differences results in the currents that we’re familiar with today.

“What happens when you put a large amount of fresh water into the North Atlantic is basically it disturbs ocean circulation and reduces the advection of cold water into the intermediate depth of the tropical Atlantic, and as a result warms the waters at this depth,” he said.

While previous studies have discussed the disruption that meltwater caused to currents and temperatures at intermediate depths, the new paper reveals that this warming was “larger than previously thought.”

“We show a hitherto undocumented and remarkably large warming of water at intermediate depths, exhibiting a temperature increase of 6.7°C from the average background value,” Weldeab said.

This exceptionally strong warming has serious consequences. The warm water impinges on marine sediment that contains abundant methane hydrates — a mixture of frozen water and methane. These  deposits are not far below the surface of the seafloor.

Weldeab explained that at high pressure and low temperatures, the introduction of unusually warm water heats the seafloor sediment, and the ice that encapsulates the gases begin to dissolve, releasing methane. Weldeab and colleagues used carbon isotopes (13C/12C) in the shells of microorganisms to uncover the fingerprint of methane release and methane oxidation across the water column.

“This is one of several amplifying climatic feedback processes where a warming climate caused accelerated ice sheet melting,” he said. “The meltwater weakened the ocean circulation and, as a consequence, the waters at intermediate depth warmed significantly, leading to destabilization of shallow subsurface methane hydrates and release of methane, a potent greenhouse gas.”

It is not known for sure whether this feedback cycle will play out in the current round of global warming, though anthropogenic activity has created a higher rate of warming than the one that occurred in the Eemian period. These findings, according to the researchers, “document and connects a sequence of climatic events and climatic feedback processes associated with and triggered by the penultimate peak climate warming that can serve as a paleo-analogue for modern ongoing warming.”

“Paleo perspective is a useful approach to help us assess what might come,” Weldeab said. “It doesn’t have to happen exactly like we found; every situation is different, but it gives you a direction where to look.”