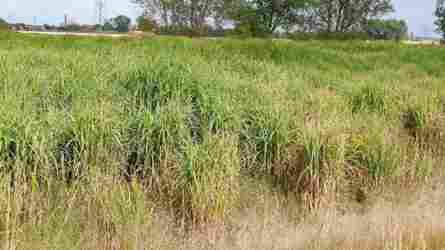 The giant miscanthus plant grows leaves earlier than annual food and feed crops and maintains a larger leaf canopy throughout and past the growing season, which new research finds can have beneficial cooling and wetting effects. Photo from Katrin Schneider, Wikimedia Commons

Amid predictions of climate change driving up temperatures and causing more extreme heat events in the Midwest, a new study led in part by University of Maryland researchers has found that growing one perennial grass could cut warming there by 1 degree Celsius.

Miscanthus x giganteus, also known as giant miscanthus, grows up to 10 feet tall with wide bamboo-like stems and green leaves, creating a canopy that has a strong likelihood of significantly lowering regional summer temperatures while increasing humidity, rainfall and overall crop productivity, according to the research published in Global Change Biology-Bioenergy.

“Growing perennial grasses on marginal land not only can reduce soil erosion, restore carbon stocks, and provide feedstocks for biofuels and bioproducts,” Liang said, “but also can represent an effective mitigation strategy to contain regional climate change, preventing the U.S. agricultural heartland from the warming-and-drying trend as currently projected.”

Miscanthus x giganteus is water-efficient and noninvasive, and requires little fertilizer. It’s also able to grow on marginal land, or land that has little or no agricultural or industrial value due to poor soil or other undesirable conditions. The U.S. heartland, which has much marginal land that goes mostly unused or in extensive grazing, provides the perfect conditions for miscanthus.

Unlike the temperature changes, which are greatest in areas with the most miscanthus, the precipitation changes can occur hundreds of miles beyond these areas due to atmospheric circulations.

The team is now working on a follow-up study on allocating multiple bioenergy crops on U.S. marginal land. Recently, they found that energy cane, a genetically modified variation of sugarcane, is more productive in Southern states while miscanthus is better in the North. They are now researching how jointly planting the two biomass crops on their optimal growth areas of marginal land may enhance their benefits to the environment.