Experimental vaccine based on altered plasmid DNA produced antibody response in mice that effectively blocked cell infection across all variants of concern tested. 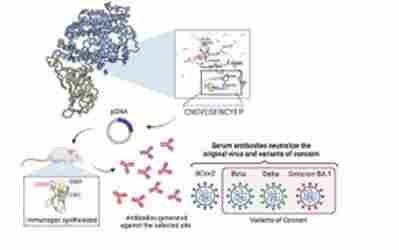 A visualization of the immune engineering process, from structure selection to authentic virus neutralization. Upper left: Analysis of interaction between SARS-CoV-2 and the ACE2 receptor revealed numerous contact residues along the receptor binding motif (RBM) ridgeline. Upper right: Focus was placed on residues comprising the FNCY patch, a conserved site on the RBM that is key to virus binding. Structure-selected residues (epitopes) are cloned and plasmid DNA encoded, with the result injected into the spleens of mice Lower left: The result was synthesis of the introduced molecules and activation of B cell immunity. Lower right: With booster, primary and memory immune response generated neutralizing antibodies to the SARS-CoV-2 virus and three variants: Beta, Delta and Omicron.

Researchers at University of California San Diego School of Medicine, with colleagues elsewhere, describe a different way to build a COVID-19 vaccine, one that would, in theory, remain effective against new and emerging variants and could be taken as a pill, by inhalation or other delivery methods.

Their findings publish in the July 21, 2022, online issue of PLOS Pathogens.

The research involved building plasmids genetically altered to contain bits of genetic material specifically intended to target a vulnerability in the SARS-CoV-2 virus’s spike protein, a portion of the virus critical to binding and infecting cells. Plasmids are small, circular DNA molecules from bacteria that are physically separate from chromosomal DNA and can replicate independently. They can be used by scientists to transfer genetic material from one cell to another, after which the introduced genetic material can replicate in the receiving cell.

The approach, said senior author Maurizio Zanetti, MD, professor of medicine at UC San Diego School of Medicine and head of the Laboratory of Immunology at UC San Diego Moores Cancer Center, points to the possibility of a more durable, and more broadly effective, COVID-19 vaccine.

“The details are complicated, but the fundamentals are simple,” said Zanetti. “They are based on well-known and proven principles and methods.”

COVID-19 mRNA vaccines, such as those by Pfizer and Moderna, are the result of decades of previous research and development. The pandemic added new urgency, focus and resources. These vaccines promised a faster way to people, though not without significant challenges, such as the need of an ultralow temperature cold chain.

The resulting mRNA vaccines have fundamentally altered the course of the pandemic, dramatically mitigating the severity of disease, hospitalizations and deaths. But notably, said Zanetti, they do little at blocking transmission of the virus. Case rates still rise and fall with the emergence of viral variants.

“The goal at the beginning wasn’t to stop the disease,” said Zanetti. “It was to mitigate the consequences, to reduce COVID’s severity and outcomes. The vaccines have done that. Vaccinated persons tend not to get as sick. They don’t require hospitalization as often. Death rates are down. All of this has greatly reduced pressures on health systems and society, which is a good thing.”

But the ever-evolving nature of the SARS-CoV-2 virus has revealed that the vaccines’ efficacy varies, depending upon variant, often diminishing. The Alpha variant, for example, proved more contagious than the “wild-type” strain that originated in Wuhan, China. The Delta variant was more transmissible than Alpha and Omicron more than Delta. Though the vaccines continue to provide substantial protection against severe disease, the antibodies they induce are consistently less powerful at neutralizing the virus, thus the increased transmission.  SARS-CoV-2 continues to be an unrelenting global public health threat.

Zanetti said the newest work emphasizes “quality over quantity,” seeking the induction of antibodies preferentially blocking virus binding to its cell receptor and transmission. This results in a more focused antibody response with the vaccine.

“In the early days of COVID vaccine development, it was about generating a broad, robust immune response,” Zanetti said. “But it was a scattered approach. The vaccines response   targeted many epitopes (parts of the virus that the host’s immune system recognizes) and it resulted in an immune response that was largely noise. Most of the resulting antibodies produced didn’t affect the virus’s ability to infect.”

“The new research narrows the focus to a part of the viral spike specifically involved in the virus’s ability to infect that appears to be evolutionarily conserved,” said co-senior author Aaron F. Carlin, MD, PhD, assistant professor in the Division of Infectious Diseases and Global Public Health at UC San Diego Health. In other words, the site doesn’t change with new variants, and represents a persisting site of vulnerability and a reliable vaccine target.

Zanetti and colleagues built plasmids containing immunogens — molecules that cause B  lymphocytes to create antibodies — that were specifically designed to display a knob of the spike protein that is part of the receptor binding motif or RBM. Specifically, these were amino acid residues that act like keys to unlock the cell door. The keys and lock don’t change.

B lymphocytes are part of the immune system. They are prodigious producers of antibodies created to respond and protect against specific antigens or unwanted substances in the body, such as viruses. The average B lymphocyte can spit out 1,000 antibody molecules per second, an incredibly robust production if it is the right antibody for the job.

Zanetti and colleagues cloned the selected spike protein amino acids into a plasmid DNA so that, when injected into the spleen of mice, the introduced immunogen molecules would provoke the production of neutralizing antibodies specifically tuned to the targeted nob on the RBM of the virus protein spike. The researchers then tested their approach on mice with variants of the original SARS-CoV-2 strain (Beta, Delta and Omicron) and found that the immune response was similar across all variants.

“We were a bit lucky in picking our target on the spike,” said Zanetti, “though it was also the result of experience and intuition. I’ve been doing this for 30 years. Earlier experiments by others had suggested this might be a ‘supersite.’ I followed my instincts.”

Zanetti said translating these findings into a vaccine suitable for clinical trials will be “an uphill battle.” There is much invested in current approaches, and it’s a considerable leap from mouse studies to human clinical trials.

But the promise of a consistently effective and easy to administer vaccine is irresistible.

“DNA is very stable. The new ideas for delivery include a pill that survives the digestive system and releases the plasmid DNA to be picked up by B lymphocytes that seem to possess an ancestral property for taking up plasmid DNA. Alternatively, the DNA can be formulated for delivery to the upper airways by suitable formulation for inhalation. Many other researchers and I have investigated and pursued this basic idea before in other ways. It’s time to try it with COVID.”