A new step in the search for room-temperature superconductors

Scientists have found a new, nanoscale link between superconductivity — the flow of electric current without a loss of energy — and a phenomenon known as charge density waves. 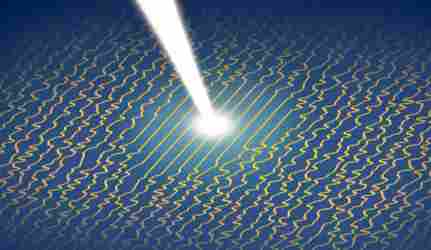 Scientists have found a new, nanoscale link between superconductivity — the flow of electric current without a loss of energy — and a phenomenon known as charge density waves.

The discovery, which is described in the journal Science, is a tantalizing step in the decades-long search for room-temperature superconductors that could unleash a new generation of electronics and computers.

The vast majority of superconducting materials operate at intensely cold temperatures, typically below -320 degrees Fahrenheit, making them impractical to use without a cooling system. Developing superconductors that operate at warmer temperatures could transform everything from laptop computers to regional power grids.

“Knowing what makes these materials superconductors gets us closer to being able to control them. We’re looking for any connection that relates to their superconductivity,” said Eduardo H. da Silva Neto, an assistant professor of physics in Yale’s Faculty of Arts and Sciences and co-author of the new study. He is also a faculty member of Yale’s Energy Sciences Institute at West Campus.

The research team, which is led by the U.S. Department of Energy’s SLAC National Accelerator Laboratory at Stanford University and includes scientists from Yale, the University of British Columbia, and other institutions, focused their study on a material called yttrium barium copper oxide (YBCO).

They found that YBCO’s superconductivity was linked at the nanoscale level with charge density waves — ripples in the density of electrons in the material.

The next step for scientists, da Silva Neto explained, is to reverse the process — and find ways to alter superconductivity via charge density waves.

A key element of the research, he added, was having access to the SLAC National Accelerator Laboratory, an underground facility in Menlo Park, California, devoted to a broad program in atomic and solid-state physics, chemistry, biology, and medicine.

Giacomo Coslovich, a staff scientist at the SLAC laboratory, was corresponding author of the new study; Scott Wandel of SLAC was the study’s first author. Tim Boyle, a visiting assistant in research at Yale, was a co-author of the study.