A new mutation behind synucleinopathies 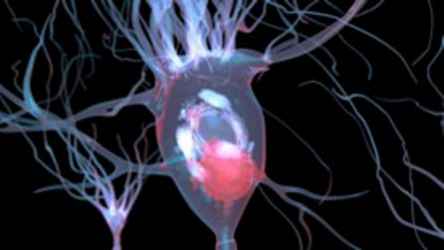 Scientists at EPFL have carried out an extensive study of a newly discovered mutation that can uncover new insights into the molecular basis of pathology formation in a family of disorders that includes Lewy body dementia and Parkinson’s disease. The study published in  Science Advances 29 April 2022.

Parkinson’s disease and Lewy body dementia belong to a family of neurodegenerative disorders called synucleinopathies because they are caused by the pathological accumulation of protein alpha-synuclein into structures called Lewy bodies and Lewy neurites in the brain.

In a healthy brain, alpha-synuclein is found in synapses as distinct proteins called monomers. But various mutations of the gene that encodes alpha-synuclein can cause the protein to clump together and form larger oligomers and even larger fibrils.

Scientists have identified and mapped out a lot of mutations of the alpha-synuclein gene that lead to synucleinopathies, with many studies, including work from the Lashuel lab, showing the mutations may also act through distinct mechanisms, leading to the same pathology. Although rare, studying these mutations has led to important insights and helped unmask different mechanisms that contribute to neurodegeneration and the development of Parkinson’s disease.

But in 2020, a study reported a new mutation of the alpha-synuclein gene in a patient with Lewy body dementia and an atypical degeneration of the frontal and temporal lobes. The mutation substitutes the amino acid glutamate (E) with a glutamine (Q) at the 83rd position of the protein’s amino acid sequence – which is why the mutation is called E83Q. What distinguishes this mutation from all previously identified mutations is that it lies in the middle of the domain that regulates alpha-synuclein normal functions (interaction with membranes) and drives aggregation and pathology formation initiation.

“I was intrigued by the unique position of this mutation and the fact that the E83Q mutation carrier showed severe Lewy body pathology in the cortical and hippocampal regions of the brain than the usual substantia nigra which tends to be majorly affected in Parkinson’s disease,” says Hilal Lashuel at EPFL’s School of Life Sciences.

Lashuel adds: “These observations suggested that the new mutation may influence alpha-synuclein's structure, aggregation, and pathogenicity through mechanisms distinct from those of other mutations and could help us uncover novel mechanisms linking alpha-synuclein to neurodegeneration and pathology formation in Parkinson’s disease”.

The scientists collaborated with the groups of Markus Zweckstetter at DZNE in Germany and Frank Sobott at the University of Leeds. They applied a battery of biochemical, structural, and imaging approaches to dissect how this mutation modifies the structure of the different forms of alpha-synuclein and its aggregation properties in vitro. Next, they used a combination of cellular models of Lewy body formation to determine how the E83Q mutation influences various aspects of alpha-synuclein associated with its normal function and pathology.

Their in vitro studies showed that this mutation not only increased dramatically the rate of alpha-synuclein aggregation but also formed aggregates with structural and morphological signatures that are distinct from those seen with the normal protein. “This was exciting since recent studies have shown that aggregates of different structures exhibit differences in their ability to induce pathology and spreading in mouse models of PD and could possibly explain the clinical heterogeneity of Parkinson’s disease and other neurodegenerative diseases,” says Senthil T. Kumar, one of the study’s first authors.

To determine if these structural differences are sufficient to translate into differences in pathology formation and toxicity, the researchers compared the ability of E83Q and the normal alpha-synuclein protein to induce pathology formation in a neuronal model of Lew body formation and neurodegeneration that was developed in the Lashuel lab and is widely used to identify novel targets and test new alpha-synuclein targeting therapies.

“In the neuronal seeding model of Lewy body formation, the E83Q mutation not only dramatically increased the seeding activity and the formation of Lewy body-like inclusions, but it also led to the formation of multiple aggregates with diverse morphological features – very similar to the diversity of alpha-synuclein pathology seen in the brains of patients with Parkinson's disease,” says Anne-Laure Mahul-Mellier, the study’s other first author. “We were thrilled to see that we can achieve this in our Lewy-body in a dish model.”

“Our findings support a central role of alpha-synuclein in the development of PD and other synucleinopathies and demonstrate that variations in the structural properties of alpha-synuclein aggregates could contribute to the neuropathological and clinical heterogeneity of synucleiniopathies,” says Lashuel. “Thus, emphasizing the critical importance of using disease models that reproduce to the extent possible the diversity of the human pathology and therapies capable of targeting the diversity of pathological alpha-synuclein species.”

As a next step, Lashuel’s group will validate these findings in animal models using material isolated from the affected patient and will further investigate whether this mutation also influences the normal functions of alpha-synuclein.