A new census of supermassive black holes that are growing

Astrophysicists have assemble an unprecedented census of the most powerful, growing supermassive black holes in the universe. 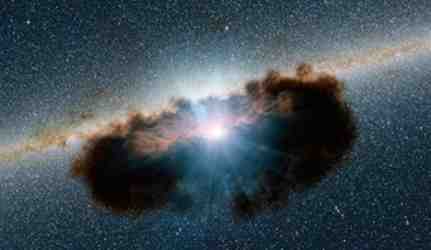 A black hole surrounded by gas and dust. (NASA)

Yale astrophysicists have helped assemble an unprecedented census of the most powerful, growing supermassive black holes in the universe.

Using data from NASA’s Swift satellite and a collection of ground-based telescopes — including the ESO Very Large Telescope in northern Chile, the Hale telescope at Palomar observatory in southern California, and the Keck telescope in Hawaii — scientists from the BASS Project have collected data for more than 850 growing black holes across the sky.

The new census includes detailed measurements of the emission lines, black hole masses, and distances from Earth for dozens of previously unrecognized systems. The BASS Project has unveiled much of the data in a special issue of the Astrophysical Journal that includes nine research studies drawn from the census.

“We joined the BASS Project because of our keen interest in understanding the growth and evolution of supermassive black holes,” said C. Megan Urry, the Israel Munson Professor of Physics and Astronomy in the Yale Faculty of Arts and Sciences and director of the Yale Center for Astronomy & Astrophysics. “The great instrumentation at the Palomar and Keck telescopes has been crucial for obtaining estimates of black hole masses in this sample, which is by far the largest set of homogeneously selected, well-characterized supermassive black holes.”

Supermassive black holes — areas of space that have such intense gravity that not even light can escape them — have masses between a million and billions of times that of the Sun and are found in the centers of essentially all developed galaxies. Fewer than 10% of these giant black holes are actively growing — by swallowing gas from their immediate surroundings.

As the gas nears its final approach to a black hole, the gas heats up and releases intense radiation, which can be detected by astronomers.

Because black holes are found at the center of almost every galaxy, they influence the evolution of galaxies throughout the universe. And yet, particularly in the case of growing, supermassive black holes, they have been difficult to find.

“The toughest challenge is that black hole growth is usually heavily obscured by gas and dust, hiding it from most telescopes,” Urry said. “However, the Burst Alert Telescope aboard the Swift satellite detects these objects at very high X-ray energies and is equally sensitive to obscured and unobscured black holes.”

The new BASS dataset used hundreds of nights of data collection on more than 10 telescopes. More than 50 astronomers around the world worked on the project.

Yale contributors included Urry; Lea Marcotulli, a postdoctoral associate in physics; Mislav Baloković, postdoctoral fellow at the Yale Center for Astronomy and Astrophysics and the Department of Physics; and former Yale graduate students Tonima Ananna, who is now at Dartmouth, and Meredith Powell, who is now at Stanford. Marcotulli is first author of another study that is also part of the collaboration.

“Thanks to the large number of systems observed, and the highly complete nature of the survey, we were able to reconstruct the distributions of black hole mass and accretion rate for all sorts of accreting supermassive black holes,” said Ananna. “We knew for a while that the largest black holes, or those accreting at higher rates, are exceedingly rare, but now we accurately quantified how rare they are, and how common it is to find a more humble black hole, of ‘only’ several dozen millions of solar masses.”