A Most Distant Signal 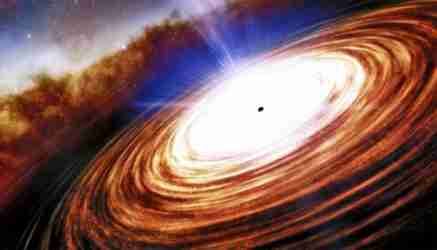 Quasars are the most energetic objects in the universe, which is why astronomers can observe them from so far away. Photo Credit: J. Da Silva/Noirlab/NSF/Aura

Nearly every galaxy hosts a monster at its center — a supermassive black hole millions to billions times the size of the Sun. While there’s still much to learn about these objects, many scientists believe they are crucial to the formation and structure of galaxies. What’s more, some of these black holes are particularly active, whipping up stars, dust and gas into glowing accretion disks emitting powerful radiation into the cosmos as they consume matter around them. These quasars are some of the most distant objects that astronomers can see, and there is now a new record for the farthest one ever observed.

A team of scientists, led by former UC Santa Barbara postdoctoral scholar Feige Wang and including Professor Joe Hennawi and current postdoc Riccardo Nanni, announced the discovery of J0313-1806, the most distant quasar discovered to date. Seen as it would have appeared more than 13 billion years ago, this fully formed distant quasar is also the earliest yet discovered, providing astronomers insight into the formation of massive galaxies in the early universe. The team’s findings were released at the January 2021 meeting of the American Astronomical Society and published in Astrophysical Journal Letters .

Quasars are the most energetic objects in the universe. They occur when gas in the superheated accretion disk around a supermassive black hole is inexorably drawn inwards, shedding energy across the electromagnetic spectrum. This releases enormous amounts of electromagnetic radiation, with the most massive examples easily outshining entire galaxies.

Quasar J0313-1806 lies 13 billion light years away, and existed a mere 690 million years after the Big Bang. It is powered by the earliest known supermassive black hole, which, despite its early formation, still weighs in at more than 1.6 billion times the mass of the Sun. Indeed, J0313-1806 outshines the modern Milky Way by a factor of 1,000.

“The most distant quasars are crucial for understanding how the earliest black holes formed and for understanding cosmic reionization — the last major phase transition of our universe,” said co-author Xiaohui Fan, a professor of astronomy at the University of Arizona.

The presence of such a massive black hole so early in the universe’s history challenges theories of black hole formation. As lead author Wang, now a NASA Hubble fellow at the University of Arizona, explains: “Black holes created by the very first massive stars could not have grown this large in only a few hundred million years.”

The team first detected J0313-1806 after combing through data from large area digital sky surveys. Crucial to the characterization of the new quasar was a high-quality spectrum obtained at the W. M. Keck Observatory: “Through University of California Observatories, we have privileged access to the Keck telescopes on the summit of Mauna Kea, which allowed us to obtain high quality data on this object shortly after it was confirmed to be a quasar at other telescopes,” Hennawi said.

As well as weighing the monster black hole, the Keck Observatory observations uncovered an exceptionally fast outflow emanating from the quasar in the form of a high-velocity wind traveling at 20% of the speed of light. “The energy released by such an extreme high-velocity outflow is large enough to impact the star formation in the entire quasar host galaxy,” said Jinyi Yang, of Steward Observatory at the University of Arizona.

The early galaxy hosting the quasar is undergoing a surge of star formation, producing new stars 200 times faster than the modern-day Milky Way. The system is the earliest known example of a quasar sculpting the growth of its host galaxy. The combination of this intense star formation, the luminous quasar and the high-velocity outflow make J0313-1806 and its host galaxy a promising natural laboratory for understanding the growth of supermassive black holes and their host galaxies in the early universe.

“This would be a great target to investigate the formation of the earliest supermassive black holes,” concluded Wang. “We also hope to learn more about the effect of quasar outflows on their host galaxy — as well as to learn how the most massive galaxies formed in the early universe.”

Finding these distant quasars requires incredibly painstaking work, since they are like needles in a haystack. Astronomers mine digital images of billions of celestial objects in order to find promising quasar candidates. “The current success rate for finding these objects is around 1%. You have to kiss a lot frogs before finding your prince,” remarked Hennawi.

Hennawi, Wang and Nanni are developing machine learning tools to analyze this big data and make the process of finding distant quasars more efficient. “In the coming years the European Space Agency’s Euclid satellite and NASA’s James Webb Space Telescope will enable us to find perhaps a hundred quasars at this distance, or farther,” Hennawi said. “With a large statistical sample of these objects we will be able to construct a precise timeline of the reionization epoch as well as shed more light on how these massive black holes formed.”