A Map for the Sense of Smell 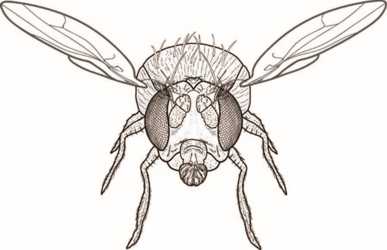 The distinctive smell of a flower… the unmistakable aroma of coffee… the dangers linked with inhaling smoke fumes. Sensory systems have evolved to provide us with immediate, finely tuned information about the world around us, whether they are colors processed through our visual system or certain pitches interpreted through our hearing.

This barrage of information is processed by our sensory systems. Scientists have uncovered maps that depict how sensory neurons are arranged based on their function to effectively process such information. This kind of functional map, however, had not yet been identified for the sense of smell. University of California San Diego researchers have now described such a smell sensory map in fruit flies. On the surface of fly antennae, where odorous chemicals are detected, the scientists have discovered how the fly olfactory system is organized, and why.

This new map was published January 28, 2022 in the Proceedings of the National Academy of Sciences by a team lead by graduate student Shiuan-Tze Wu from the laboratory of Biological Sciences Associate Professor Chih-Ying Su. The study details how the fly’s olfactory receptor neurons, the components that sense smell, are organized within the sensory hairs.

“We are constantly being bombarded by hundreds of odorous chemicals in our environment,” said Su, the corresponding author of the study. “We have described a peripheral mechanism that has allowed the fly to make sense of such overwhelmingly complex stimuli.”

The researchers provide evidence that the fruit fly’s olfactory system, which Su described as simple yet elegant, is structured to give the insect the ability to make quick assessments of odors in an unusual way that circumvents synaptic communication, which is metabolically expensive. Rather, the insect’s olfactory receptor neurons (ORNs) communicate through electrical interactions with nearby ORNs. This offers an energy-saving, “metabolically cheap” way to process “meaningful odor blends without involving costly synaptic computation,” the researchers note in the paper.

The study describes how compartments with two ORNs are arranged to detect cues with opposite meanings for the fly. Such cues either promote or inhibit certain behaviors—to quickly and efficiently assess complex odors in their environment.

“This arrangement provides a means to both evaluate and shape the countervailing sensory signals relayed to higher brain centers for further processing,” according to the paper.

“In asking questions about the functional meaning of this organization, we found that nature has chosen a specific way of structuring this sensory assay,” said Aljadeff. “If we can understand the principle of this type of processing, there could be future engineering applications.” Aljadeff is funded by a Defense Advanced Research Projects Agency (DARPA) Young Faculty Award to investigate such questions.

Wu, the first author of the study, is proud to be part of the team that made this fundamental discovery. He marvels at the elegance of the system by which fly ORNs compute countervailing cues and points to parallels in the way that visual systems contrast color shades to help us perceive the difference between red and green, for example.