A health monitor for concrete buildings 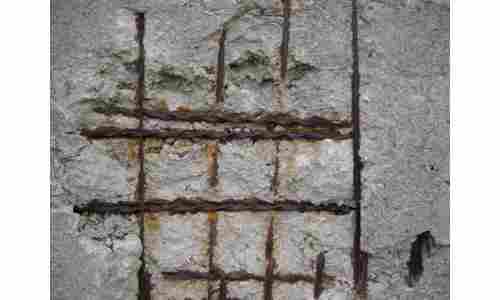 Image by gratuity at freeimageslive

Concrete structures such as bridges, buildings, and roads use steel reinforcement bars—called rebars—to increase the strength of the concrete and make the structure durable. Despite using preventive measures such as anticorrosive coatings, these rebars are prone to rust, leading to corrosion. Several factors such as water seepage, exposure to chemicals and incorrect salinity and acidity of concrete can cause corrosion. Timely corrosion detection can warn about structural degradation and significantly lower repair and maintenance costs. Today, the most commonly used methods to examine corrosion do not accurately estimate the extent of corrosion and, therefore, the remaining service life of the structure.

A team led by Prof Siddharth Tallur and Prof Sauvik Banerjee of the Indian Institute of Technology Bombay (IIT Bombay) has developed a probe to measure the extent of corrosion in rebars embedded in concrete. The probe can be placed on the surface of a concrete structure to make the measurement. Probe and sensor design improvements and novel signal processing techniques make it more sensitive and accurate than conventional measurement techniques. The research was partially funded by the Department of Science and Technology, Government of India, and Sanrachana Structural Strengthening Pvt. Ltd. A study based on this work was published in IEEE Sensors Journal.

One of the currently used methods, the half-cell potential measurement, involves drilling a hole in the structure to expose a portion of the rebar. This portion is connected to the measuring instrument. The method uses the voltage difference created due to different electrochemical properties of corroded and non-corroded regions. In addition to being an invasive testing method, this technique only provides a probabilistic estimate of corrosion rate and not the extent of corrosion.

Non-destructive testing methods that do not disturb the structure in any way use changes in electrical, magnetic, or acoustic properties of the material to detect corrosion. An electrical resistance probe uses a sensor embedded in concrete during casting to measure the electric current through the rebar. Corrosion results in a change in the probe’s resistance, which is, in turn, detected as a change in the electrical signal. However, this technique has low sensitivity and is therefore not widely used. Another non-destructive testing method is Acoustic Emission Sensing. A sensor ‘hears’ the sound waves formed by the stress created in the concrete surrounding the rebar when cracks appear in the concrete due to corrosion. However, this method cannot directly estimate the extent of corrosion and is not sensitive to early-stage corrosion, that is, before crack formation.

The pulsed eddy current method is used commercially to inspect oil, gas, and water pipelines. A probe can be placed very close to or directly on the surface of the pipe. However, the steel rebars are buried deep inside the concrete, making it challenging to use this method to detect corrosion in concrete rebars. Moreover, rebars are thinner than pipes and offer much lesser surface area. Hence they require high-sensitivity and expensive probes. However, the researchers at IIT Bombay have designed a high-performance probe using inexpensive electronic components, making it a low-cost solution.

The IIT Bombay researchers improved the probe's sensitivity using a highly sensitive magnetic field sensor called anisotropic magnetoresistive (AMR) sensor. They have invented a novel signal processing method that uses a known mathematical technique called principal component analysis to compute features that can be used to calculate the extent of corrosion from the AMR sensor output signal. The team has filed an Indian patent application for their invention.

The researchers tested their probe on rebars corroded artificially in the lab since natural corrosion takes years to develop. They observed that the probe could detect corrosion in rebar at up to 5.5 cm distance from the probe that is among the highest depth reported so far for any non-destructive methods to detect corrosion. Prof Tallur says, “This is particularly impressive, considering that the instrument we developed uses a low-amplitude current pulse and compact probe design. Therefore this work is a key breakthrough for developing handheld inspection tools based on pulsed eddy current technique.” He suggests that such laboratory-based test samples faithfully mimic the type of specimens one encounters in the field, the ones that have undergone years of corrosion. So, their technology is field-deployable in its present form. The researchers are working on rugged handheld packaging for the probe to undertake pilot field studies.

Manufacturers, building owners, service companies, pipeline and storage tank owners, maintenance professionals, and contractors can use this device to directly measure the extent of corrosion of their infrastructure. Based on the type of infrastructure and severity of corrosion, they can take possible remedial actions. Those may include retrofitting and repairs or identifying developing weak spots requiring closer monitoring and inspection to determine necessary repairs.

The team is currently creating a handheld scanner product based on this innovation that operators could use for structural inspection or safety audits with minimal training. They have developed algorithms that will be implemented in a smartphone app connected to the instrument. It will seamlessly provide information to the user on the state of health of the rebar. “Our goal is to create a product that is so easy to use that anyone who knows how to use a smartphone should be able to use it without having to consult any user manual,” signs off Prof Tallur.