Floating on the surface of water, the versatile microrobotic discs can move in circles, bunch up into a clump, spread out like gas or form a straight line like beads on a string. 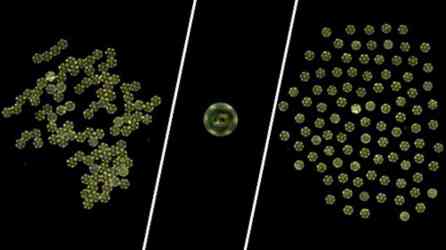 Microrobots, only slightly larger than the width of a human hair, configured in different formations.Max Planck Institute

Researchers at Cornell University’s College of Engineering, the Max Planck Institute for Intelligent Systems, and Shanghai Jiao Tong University have developed collectives of microrobots capable of reconfiguring their swarm behavior quickly and robustly. Floating on the surface of water, the versatile microrobotic discs can move in circles, bunch up into a clump, spread out like gas or form a straight line like beads on a string.

Each robot is slightly bigger than a hair’s width. They are 3D printed using a polymer and then coated with a thin top layer of cobalt. Thanks to the metal the microrobots become miniature magnets. Meanwhile, wire coils which create a magnetic field when electricity flows through them surround the setup. The magnetic field allows the particles to be precisely steered around a one-centimeter-wide pool of water. The researchers can steer the robots through complicated mazes and they can have them manipulate objects, both directly and by generating flow in their surroundings.

The research was published in Nature Communications on April 26 and the co-authors include Kirstin Petersen, assistant professor of electrical and computer engineering at Cornell, and graduate student Steven Ceron, both of the Collective Embodied Intelligence Lab.

“This work is especially exciting, in that it shows how we can leverage both robot-robot and robot-environment interactions to achieve complex global behaviors with large numbers of very simple agents,” Petersen said. “This approach may prove fundamental to future applications in biomedicine and environmental remediation at the micro-scale.”