To start the process of unpacking tightly bundled genetic material, plants depend on the LEAFY pioneer protein 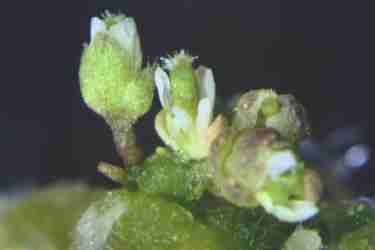 Using an experimental technique whereby flowers can be coaxed to form from plant roots, biologists led by Doris Wagner uncovered a protein that enables for the initial loosening of chromatin that can allow new proteins to be made and plants to take on different forms. (Image: Courtesy of the Wagner laboratory)

Cells don’t express all the genes they contain all the time. The portion of our genome that encodes eye color, for example, doesn’t need to be turned on in liver cells. In plants, genes encoding the structure of a flower can be turned off in cells that will form a leaf.

These unneeded genes are kept from becoming active by being stowed in dense chromatin, a tightly packed bundle of genetic material laced with proteins.

In a new study in the journal Nature Communications, biologists from the University of Pennsylvania identify a protein that enables plant cells to reach these otherwise inaccessible genes in order to switch between different identities. Called a “pioneer transcription factor,” the LEAFY protein gets a foothold in particular portions of the chromatin bundle, loosening the structure and recruiting other proteins that eventually allow genes to first be transcribed into RNA and then translated into proteins.

“The programs that are not needed in a given cell or tissue or condition are effectively shut off by various chromatin modifications that make them very inaccessible,” says biologist Doris Wagner of the School of Arts & Sciences, senior author on the work. “The question has always been, How do you go from shut to open? We found that LEAFY, this protein that we already knew was important in reprogramming plant cells, is one of these pioneer transcription factors that get a foot in the door, as it were, to alter the program of cells.”

Pioneer transcription factors were first characterized by Penn faculty member Kenneth Zaret of the Perelman School of Medicine, whose own work has examined these regulatory proteins in animals, such as in the context of liver development. Early in her time at Penn, Wagner heard Zaret give a talk about his work in this area and grew curious about looking for similar factors in plants, given that flexible gene expression is so critical to their survival.

Indeed, plants must switch between expressing whole sets of different genes all the time. In rich soils, they may grow more branches to get bigger, while in a drought they may express more genes associated with developing flowers, so they can set seed and reproduce before they succumb.

How plant cells determine their identity and fate has been a focus of Wagner’s work since the start of her career, and so has LEAFY. During her postdoc days, Wagner showed that LEAFY could reprogram root cells to produce flowers. “That gave us a good clue that LEAFY might have this ‘pioneer’ activity, but we had to look more closely to prove it,” she says.

To do so, Wagner and colleagues first used isolated protein and strands of genetic material to show that LEAFY, though not other transcription factors, bound to nucleosomes, subunits of chromatin where DNA spools on a cluster of proteins called histones. Specifically, the binding occurred at the gene AP1, which is known to be activated by LEAFY to prompt plants to make flowers.

To confirm that this connection was true in a living organism, the researchers took plant roots and applied a compound that causes them to flower spontaneously. When flowering, they found that not only did LEAFY bind strongly to AP1 but that the binding site was also occupied by a histone. “This tells us that the histones and LEAFY are really occupying the same portion of DNA,” Wagner says.

Furthermore, they showed that chromatin structure began to open up at the AP1 region when LEAFY was activated, a key facet of what pioneer transcription factors do. This opening was limited, and full loosening of chromatin took days. What did happen quickly, the researchers found, was that LEAFY displaced a linker histone protein, creating a small local opening that also allowed other transcription factors to nose their way into the DNA.

Though pioneer transcription factors had been proposed to exist in plants, the new work provides the first concrete support backing this conception for LEAFY. And Wagner believes there are others. “If necessary, plants can alter their entire body plan or generate an entire plant from a little piece of leaf,” she says. “We predict setting this in motion will require pioneer transcription factors. So plants may actually have more of these factors than animals.”

In upcoming work, she and her team hope to delve more deeply into the processes that precede and follow this “pioneering” activity of LEAFY: Does anything restrict its activity and how do the other factors that it recruits fully unpack the hidden-away genes? “It would be great to find out both sides of this equation,” Wagner says.

The findings have significance in agriculture and breeding, where LEAFY is already manipulated to encourage earlier flowering, for example. And as more is understood about pioneer transcription factors in plants, Wagner can envision a fine tuning of other aspects of plant growth and activity, which could be leveraged to help crops adapt to new environmental conditions, such as those being ushered in by climate change.